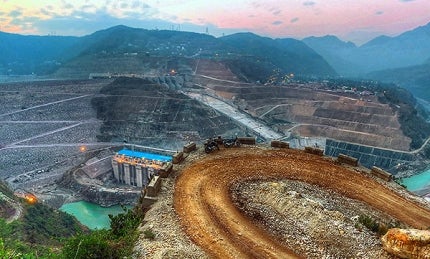 The 800MW Koldam hydroelectric power project (HEPP) is under construction on the Satluj River in the Bilaspur District of Himachal Pradesh, India. India’s state-run National Thermal Power Corporation (NTPC) is the owner and developer of this hydel project.

Koldam HEPP was initially planned to be operational in 2009, but its commissioning has been postponed to 2014 due to environmental and geographical hurdles faced during its construction. When operational, the HEPP is expected to generate approximately 3,054GWh of electricity per annum.

The 1,600MW Eemshaven Power Station is being constructed near Eemshaven Port in Groningen, Netherlands.

The project will comprise a 167m tall rock and gravel fill clay core dam with a crest length of 474m and a chute-type spillway with six 17.1m wide and 17.74m radial gates situated to the left of the dam. It will further comprise a surface-type 135m x 42m x 48m powerhouse containing four vertical Francis-type 200MW turbines to be operated with 144m hydraulic head, an open-type tailrace channel 100m in length and a surface/conventional-type switchyard.

The reservoir created by the dam can hold up to 560 million cubic metres of water.

Power generated from the Koldam HEPP will be fed into the national grid via the 400kV D/C line.

The plant’s power output will be supplied to a number of Indian states including Delhi, Haryana, Punjab, Rajasthan, Uttar Pradesh, Himachal Pradesh, Jammu and Kashmir, and Chandigarh. The host state Himachal Pradesh is entitled to receive 15% of the generated power free of cost and a further 12% at bus-bar rate.

Koldam HEPP broke ground in 2000. Construction of the main dam began in 2004. The excavation of the main dam area (1.86 million cubic metres) was completed in February 2007, whereas the dam gravel filling works had started in August 2006. The dam construction, however, suffered frequent delays due to rain and leakages from the dam clay.

Other major construction works included the erection of upstream and downstream coffer dams, as well as the construction of an approach channel, diversion tunnels, a pen stock, a power house and a switch yard.

A consortium comprised of BHEL, Marubeni and Toshiba was awarded the contract for supplying, transporting, installing and commissioning the Francis turbines, generators, transformers and associated machinery for Koldam HEPP.

L&T was awarded the contract to construct the 400kV switchyard and the transmission line.