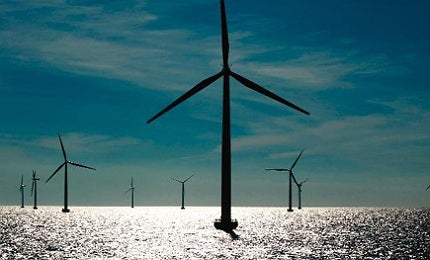 Construction on the London Array, which is the world’s largest offshore wind farm, began in July 2009. The plant is located around 15km from the Kent and Essex coasts in the outer Thames Estuary, UK. It will see up to 341 turbines in an area of up to around 245km² on and between the Long Sand and Kentish Knock sandbanks.

The whole project costs around £3bn, and is being developed by a consortium called London Array Limited. This initially had three partners: Shell WindEnergy, E.ON and DONG Energy. In July 2008, though Shell pulled out, it committed to leave its staff in the project until the end of the year. Shell has been replaced by Masdar and has a 20% stake in the project, while DONG Energy and E.ON have 50% and 30% stakes respectively.

On 29 October 2012, the first power from the wind farm was produced. Construction of the first phase was completed in December 2012 with the installation of the last of the 175 turbines constituting phase one.

“Construction of the first phase was completed in December 2012 with the installation of the last of the 175 turbines.”

The wind farm is being constructed in phases. The first phase of the project started producing power in October 2012 and will generate 630MW when fully operational. Construction of the second phase will increase the capacity, with the total being 870MW.

When complete, the wind farm will meet the electricity needs of 750,000 homes – around a quarter of Greater London or all of the homes in Kent and East Sussex. It will displace 1.9 million tonnes of carbon-dioxide each year. It generates nearly seven percent of the UK Government’s renewable energy target of providing 15.4% of the UK’s electricity from renewable sources by 2015.

London Array applied for the various planning consents and licences in June 2005, following extensive environmental studies, which began in 2001. A variety of planning consents and licences were needed, from different consenting bodies. Onshore, the consents included the substation, access road and changes to overhead lines. Offshore, they included the wind farm itself, as well as offshore substations and cables.

The Department for Business, Enterprise and Regulatory Reform is the main government department responsible for administering applications for offshore wind farms. It works with other departments and statutory consultants, including the Department for Environment, Food and Rural Affairs (Defra). An approval from the Department for BERR was also needed to support overhead line works for the proposed onshore substation at Cleve Hill near Graveney.

An environmental impact assessment addressed the possible effects on birds, fish, mammals and the seabed ecology. It also assessed the effects on shipping and navigation, boat traffic and coastal processes, along with visual and noise impacts. Responsibility for granting planning permission for the proposed onshore substation at Cleve Hill (and the electricity cables from the onshore substation to the mouth of the Swale) lies with Swale Borough Council and Canterbury City Council.

Onshore construction began in July 2009. The site has high wind speeds, a low water depth and suitable ground conditions. 341 turbines were needed, along with the foundations securing them to the sea bed. The turbines were grounded in an area of up to 245km² on and between the Long Sand and Kentish Knock sand banks.

A monopile foundation was used for phase one. Array cabling connects groups of turbines and offshore substations, which step up the voltage to reduce losses before feeding the power to shore. Up to six undersea export cables connect the offshore transformers and the shore.

The Siemens SWT-3.6 turbine generates 3.6MW. The hub height is between 80m and 90m above sea level, and the total turbine height will not be greater than 175m. The turbines have three blades. The turbines are painted grey, with a bright colour band on the lower part of the turbine to increase the visibility of the turbines to boats. In addition, navigation lights, markings and red aircraft warning lights are installed to meet safety requirements. The distance between the maximum sea level and tip of the blade is more than 22m, to minimise risk of damage to crafts.

They typically begin generating electricity at a minimum wind speed of 3m/s, with full power achieved from 13m/s. For safety reasons they will begin to shutdown at wind speeds greater than 25m/s (a force nine gale).

Power distribution to the National Grid

The onshore substation is connected to the National Grid’s 400kV transmission system. The substation construction began in August 2007 after a public enquiry.

First tier suppliers for the construction of the first phase for 630MW were announced on December 2009. Contracts to supply marine crew and vessels were awarded to MPI and A2SEA and a €100m power cable contract was given to Nexans. Siemens supplied 175 SWT-3.6MW turbines to the onshore substations.

“The government has advised cutting carbon emissions by 50% by 2050 to avoid dangerous climate change.”

MPI supplied state-of-the-art vessel MPI Adventure, to ship cables and install more foundations and turbines compared with the boats. A jack-up barge was supplied by A2SEA.

In addition to supplying the turbines, Siemens also provided the instrumentation and control equipment for the project. It also conducted the design and grid access studies.

The project came under cash crunch after Shell Energy withdrew itself from the project due to the economic crisis in 2008. The project received financial backing from European Investment Bank (EIB) for £3bn, which is the total cost of the project.

There is intense pressure from the government to reduce carbon gas emissions from the coal-fired plants as they emit three times more carbon than the gas-fired plants. The government has advised cutting carbon emissions by 50% by 2050 to avoid dangerous climate change. It has introduced regulations to source energy from renewable sources. Currently, the UK generates only eight percent of energy from renewable sources.

The Thanet Offshore Wind Farm is located 11km from the coast of Thanet, in Kent, UK.

The UK Government’s plans for energy in fiscal 2012 will centre on oil and gas exploitation and job creation.