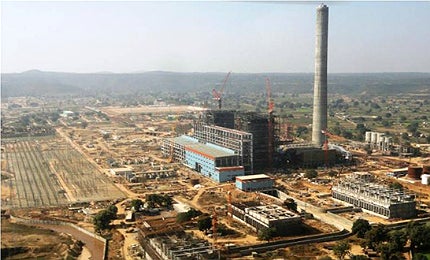 Mahan I thermal power project is located in the Singrauli district of Madhya Pradesh, India. It is a 1.2GW coal-fired plant, comprising of two 600MW generating units. Unit I of Mahan I began operations in December 2012.

Unit II of the plant is under construction, with operations expected to start in the first quarter of 2013. The $1.2bn Mahan I power project is being developed by Essar Power, a subsidiary of Essar Energy.

Details for the Indian power project

“The $1.2bn Mahan I power project is being developed by Essar Power, a subsidiary of Essar Energy.”

Mahan power project was originally proposed as a four x 500MW (2GW) power plant in 2005. The project plan was, however, changed later to a 1.8GGW power station, to be built over two phases, namely Mahan I (1.2GW) and Mahan II (600MW).

The project was conceived as part of Essar Power’s strategy to generate low-cost power by exploiting relatively cheap domestic coal resources available in India. Mahan was advanced based on the prospect of sourcing coal from the nearby Mahan Forest coal deposit, which has proven coal reserves of 150 million tonnes (mt) of coal.

However, the project execution was delayed due to approval issues related the development of Mahan coal block, which is owned by a 50:50 joint venture between Hindalco Industries and Essar Power.

The stage one forest clearance for the Mahan coal block was finally received in October 2012, but the mine approval for the coal block is pending. Essar wanted to kick-start power generation at Mahan with a temporary coal supply arrangement.

Unit I of Mahan I is already commissioned and synchronised with the transmission grid, while the work on Unit II is nearing completion, as of February 2013.

Coal sources for the Mahan I thermal power plant

As per the lease agreement, Essar will use 60% of the Mahan coal block’s output for its Mahan I power project, while Hindalco will use the remaining 40% for a 750MW captive power plant for its upcoming aluminium smelter, also located in the district.

The Mahan I project was also allotted a share of coal from the Amelia coal block (estimated coal reserves of 214 million tonnes) in September 2012. The coal will be supplied by Madhya Pradesh State Mining Corporation (MPSMC), which owns and operates the Amelia coal block as part of a long-term linkage arrangement.

Technology at the Madhya Pradesh-based facility

The two generating units of the pithead coal-fired power plant comprise of a boiler, cooling tower and transformer yard.

The plant uses pulverised-coal combustion technology. Coal is finely ground and fed with air into the burners. The heated coal converts the water passing through the boiler pipes into super-heated steam. The generated steam spins the turbine generator to produce electricity. The low-pressure steam is sent through a condenser, to cool the steam into water for reuse in the boiler.

Most of the fly-ash particles present in the plant’s glue gas are caught by electrostatic precipitators.

Other facilities at the plant include a coal stockyard, coal mills, a water demineralising plant, a 400kV switchyard, a main control room and an administration building.

The 1.2GW Mahan I will supply 62.5% of its capacity to Essar Steels (Essar’s Hazira Steel plant).

The remaining power will be supplied to state-owned power distribution companies in Madhya Pradesh, as per the memorandum of understanding (MoU) signed with the state government.

The transmission infrastructure for the power plant consists of the 315km-long 400kv Mahan-Sipat transmission line, which is an alternate Loop in Loop Out (LILO) line, the 97km 400kV Gandhar-Hazira line and a 400/220kV substation at Hazira.

The transmission infrastructure for Mahan I is being developed as part of a separate $286m project by Essar Power Transmission Company (EPTL), which is a 100% owned subsidiary of Essar Power.

The $1.2bn Mahan I project is being financed through a debt-equity ratio of 3:1. The debt portion was financed by a consortium led by ICICI Bank. The other lenders for the project were Power Finance Corporation, Rural Electrification Corporation and Punjab National Bank.

Essar Projects is the engineering, procurement and construction (EPC) contractor for the Mahan power project. Essar Engineering (EESL) in consultation with Tata Consulting Engineers (TCE) is responsible for basic engineering works of the power plant.

Harbin Power, China is the supplier of boilers, turbines and generators for Mahan I. Areva supplied the Electrical Balance of Plant (EBOP) for Mahan I.

The cooling towers of the plant were provided by SPIG. The contract for the Ash Handling System of the plant was awarded to McNally Bharat.

Salaya power project is located in the Jamnagar district of Gujarat, India.