Expand
The Moorside power project will be situated on land to the north and west of the Sellafield site. Image courtesy of http://www.visitcumbria.com/
The plant will feature three Westinghouse AP1000 reactors.
Westinghouse AP1000 has passive containment cooling systems. 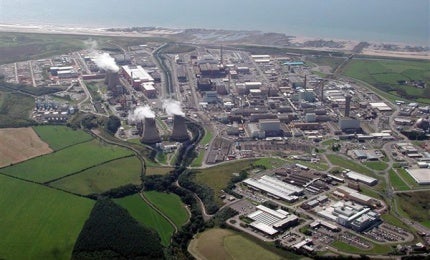 The power project, which will account for approximately 7% of the UK’s future electricity requirements, will be developed by NuGeneration (NuGen), a joint venture between Toshiba (60%) and GDF SUEZ (40%), at an estimated cost of £10bn ($17bn). This represents the biggest ever private investment in West Cumbria.

It will consist of three similar-capacity Westinghouse reactors, which are scheduled for commissioning between 2024 and 2026.

The nuclear power project is expected to create up to 21,000 jobs during its construction and operation.

The power station will be built on land to the north and west of the current Sellafield nuclear site in West Cumbria. It will consist of three Westinghouse AP1000 pressurised water reactors (PWR) of 1,154MWe nameplate capacity each.

"The Moorside nuclear power station will consist of three similar-capacity Westinghouse reactors, which are scheduled for commissioning between 2024 and 2026."

AP1000 is the only Generation III+ reactor to receive design certification from the US Nuclear Regulatory Commission (NRC). The planned assessment of the reactor design by the UK regulators was completed in 2011, followed by interim design acceptance confirmation (iDAC) and an interim statement of design acceptability (iSODA) for the reactor.

The AP1000 reactors come with passive safety systems and render a simplified and low-cost plant design while minimising the construction period of a reactor to 36 months, starting from first concrete pour to fuel loading. The Moorside reactors will be fuelled by Westinghouse UK’s fuel fabrication facility in Preston.

NuGen secured the option to purchase 200ha land for the site from the Nuclear Decommissioning Authority (NDA) in October 2009. The UK Government, through its National Policy Statement (NPS), confirmed the suitability of the site for the development of a nuclear power generation facility in June 2011.

Toshiba bought a 50% stake in NuGen from the previous partner Iberdrola, a Spanish power firm, and a 10% stake from GDF SUEZ, in June 2014.

"NuGen aims to secure a nuclear site licence in 2018, while the final investment decision is expected by the end of the same year."

NuGen is now preparing detailed plans for the site, which will be submitted for consideration by the relevant planning authorities by the end of 2015.

The site assessment for the nuclear power project, to be carried out in 2014 and 2015, will include geophysical surveys, geological age dating and some borehole drilling work. The first public consultation is expected in 2015.

NuGen aims to secure a nuclear site licence in 2018, while the final investment decision is expected by the end of the same year.

Contractors and services for Moorside

Westinghouse Electric Company is the technology provider for the Moorside project, while Tractebel Engineering, a subsidiary of GDF SUEZ is the owner’s engineer for NuGen. It will supply a range of engineering services, starting from feasibility studies through to construction, operation, maintenance and decommissioning.

Project management and technical consultancy firm WYG was hired to plan and develop workable options for connecting the Moorside power station with the UK National Grid.