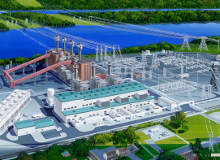 The Panda Hummel Station Power Plant is a 1,124MW natural gas fired, combined-cycle power plant proposed to replace the 400MW Sunbury coal fired power plant, which was decommissioned in 2014 due to low natural gas prices and the introduction of strict environmental regulations by the US Government.

Touted to be one of the biggest coal to natural gas conversion projects in the US, the project is being developed by a joint venture (JV) of Panda Power Funds and Sunbury Generation.

The new plant will be located adjacent to the site of the decommissioned coal-fired power plant, covering an area of approximately 18 acres within the 192-acre Keystone Opportunity Expansion Zone (KOEZ). The KOEZ is being developed by Sunbury Generation and Panda Power Funds’ affiliate Arcova Development. The site is located on the west bank of the Susquehanna River in Shamokin Dam Borough, Snyder County, Pennsylvania.

Construction works for the Marcellus Shale gas-fuelled power plant are scheduled to start in late-2015 and commissioning is scheduled for the second half of 2017.

The output from the Pennsylvanian combined-cycle power plant will be sufficient to serve approximately one million homes, primarily within Philadelphia and the New York metropolitan area.

The project is expected to generate roughly 900 construction jobs as well as 35 direct jobs and 52 indirect jobs during the operations phase.

The project management, engineering, procurement, construction and start-up services for the project will be rendered by Bechtel, whereas Siemens will supply the power island package consisting of natural gas turbines, steam turbine, generators and heat recovery steam generators as well as instrumentation and controls systems.

Patriot is an 829MW combined-cycle power plant being constructed on an 85-acre site in Clinton Township, Lycoming County, Montgomery Borough, Pennsylvania, US.

The Marcellus Shale gas required for the power plant will be sourced from the MARC 1, Regency and Transcontinental regional gas pipelines, via UGI Sunbury’s proposed 35-mile (56.3km) lateral pipeline. The new 20in-diameter steel pipeline will be designed to transport 200,000 dekatherm (Dth) a day of natural gas.

Grid connection for the power plant

The output from the project will be conveyed to the grid via PJM Interconnection’s recently completed 146-mile (235km), 500kV Susquehanna-Roseland Electric Reliability transmission line.