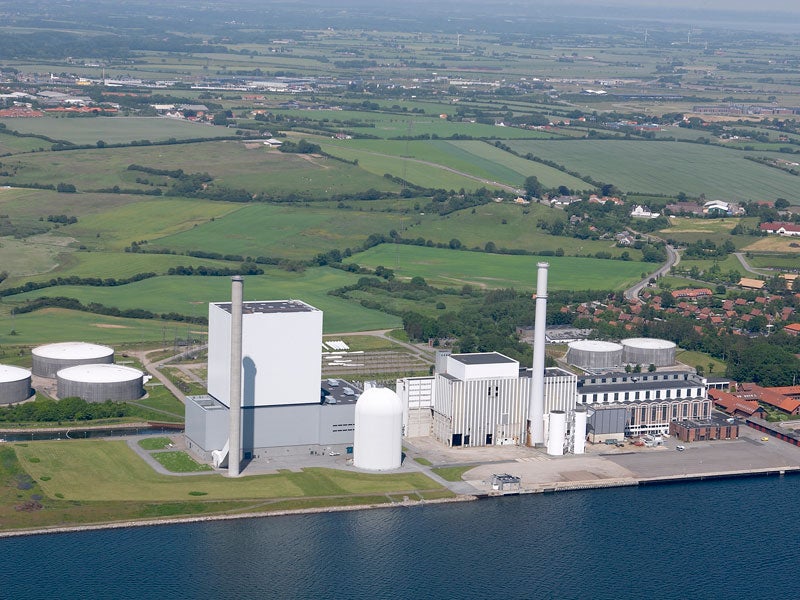 On 28 August 2014, a ground-breaking ceremony for the construction of the 280MW Skaerbaek power station conversion was held. The project was completed at a cost of kr1.8bn (approximately $259m), in October 2017. It created up to 700 jobs during the construction phase.

The plant is expected to supply green district heating to roughly 200,000 inhabitants in the Danish Triangle Region. It can also offset 400,000t of CO2 a year from the atmosphere.

Generating electricity and heat from three units using natural gas, the historic Skaerbaek power station was established in 1951 on the northern side of Kolding Fjord.

Conversion of the plant into a dual-fuel facility paves way for the establishment of a large, green power and heat production facility in the Danish Triangle Region.

The wood chip-fired plant is linked to unit three at the power station, enabling the unit to use the chips as primary fuel to produce heat, while natural gas is used as secondary fuel.

The plan also included the renovation of the power station’s 250m-long quay, expansion of the port facility, and installation of two new flue gas pipes in the existing chimney of unit two.

“The plan is expected to supply green district heating to roughly 200,000 inhabitants in the Danish Triangle Region.”

Heavy-duty steel elements were imported from India for the construction of the wood chip boilers.

Chips are transported to the power station during the winter months by ships and barges, which have a carrying capacity between 6,000m³ and 16,000m³, and are accommodated at the 175m-long quay.

The Skaerbaek CHPP has the potential to combust up to 154t/h of wood chips. Each boiler has been designed to operate 24/7, having a running time of at least 8,000 hours a year.

Wood chips are unloaded from the ships and barges using a new conveying system and two new unloading cranes at the quay. Conveyor belts are used to transport the wood chips to the open wood chip storage facility, which has a capacity of up to 80,000m³.

Chips are initially placed at the top of the storage facility’s chip pile and delivered to the boilers by using the conveyor belts from the two screw conveyors located at the bottom of the facility.

Steam and water generated in the boilers are separated by two steam drums, which are used for the production of heat for district heating. The steam is fed into the existing turbine of the CHP plant to generate heat and electricity.

TVIS entered a heating agreement with Dong Energy for the Skaerbaek power station in June 2014.

Until 2037, TVIS will pay 80% of the construction costs of the wood chip-fuelled plant and will have the right to the heating capacity generated by the CHPP.

TVIS currently purchases the heat produced by CHP plants and in-turn supplies to households and companies in Fredericia, Kolding, Vejle and Middelfart.

Babcock & Wilcox Vølund was awarded an $80m contract for the supply of two biomass-fired boiler systems and equipment for the CHPP. Its contractual scope included design, manufacture, supply, construction, and commissioning of the plant’s boiler system.

Sweco was the engineering consultant in the analysis, site-development and execution phases.

Krøll Cranes has been manufacturing quality tower cranes on the...

BarkerBille designs and manufactures a variety of highly efficient fans...

GNA I is an integrated liquefied natural gas (LNG)-to-power project located in Rio de Janeiro, Brazil. It is the first…

The Long Ridge energy generation project is a 485MW combined-cycle power plant being developed in Hannibal town in Monroe County,…