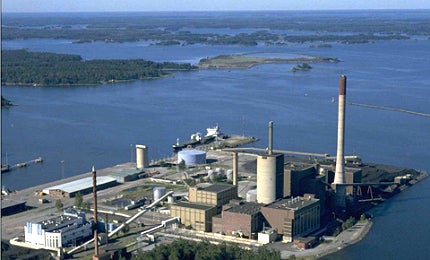 The project will help Vaskiluodon Voima to replace the use of 25-40% of the coal it currently uses for production of electricity. The plant will reduce carbon-emissions by about 230,000t a year and will be the world’s largest biomass gasification of this magnitude.

The project received financial aid of approximately €10m ($13m) from the Ministry of Employment and the Economy. The Nordic Investment Bank (NIB) provided a loan of €18m ($23.4m) for the project. Procurement of the domestic feedstock will generate €15m ($19.5m) a year to the regional economy.

The biomass gasification plant is part of the Vaskiluoto 2 coal-fired plant.

The project involved construction of a fuel handling area, a drying plant and a circulating fluidised bed gasifier. It also witnessed modification of the existing coal boiler, and automation and installation of other IT systems necessary to operate efficiently.

The project is unique in a sense, as the wood-fired system includes a feedstock drying process, which sets it apart from other biomass gasification processes. The feedstock is dried using surplus heat produced by the plant and hence allows the use of moist wood chips which are less expensive.

The plant uses wood as the primary fuel, which largely comprises of forest residue. Gas resulting from the gasification process is combusted along with coal in the coal boiler reducing significant consumption of coal. The biogas can also be co-fired with agro-biomass, peat and other fossil fuels.

The plant provides for low operational costs, as it enables a fuel mix diversity. It can begin producing electricity by shifting to the original coal capacity in case of price fluctuation or supply disruptions of feedstock. It can also increase the use of biofuels when required.

The 140MW biomass-gasification plant was supplied my Metso. The company was contracted in June 2011 for a value that was more than half of the project’s cost.

Metso was in-charge of receiving and handling the feedstock, delivering the large-scale KUVO dryer, a circulating fluidised bed gasifier and modifying the existing coal boiler. It was also responsible for the electrification and automation of the gasifier and the integrated fuel handling system.

Vaskiluoto 2 was originally a 160MW oil-fired plant. It was commissioned in 1972.

“The project will help Vaskiluodon Voima to replace the use of 25-40% of the coal it currently uses for production of electricity.”

A desulphurisation plant was constructed adjacent to the coal plant in 1993 and the coal-fired boiler was fitted with new burners a year later to reduce carbon emissions.

The boiler efficiency was increased in 1998 by fitting a new 230MW turbine to the existing coal plant. The mothballed oil-fired boiler was again connected to the oil-fired unit to be used at peak loads.

The burners were modernised in 2007, which reduced the carbon emissions by further 30%.

UK-based food waste recycling company PDM Group has constructed a new biogas plant at its headquarters in Doncaster, South Yorkshire, UK, at an investment of £12m.

A 130MW biofuel-fired boiler plant using bubbling fluidised bed (BFB) combustion was built in Sweden, close to the town of Örnsköldsvik in 2008. The final testing was conducted in late 2008. The contract, worth €50m, was awarded to Aker Kvaerner by Övik Energi AB.