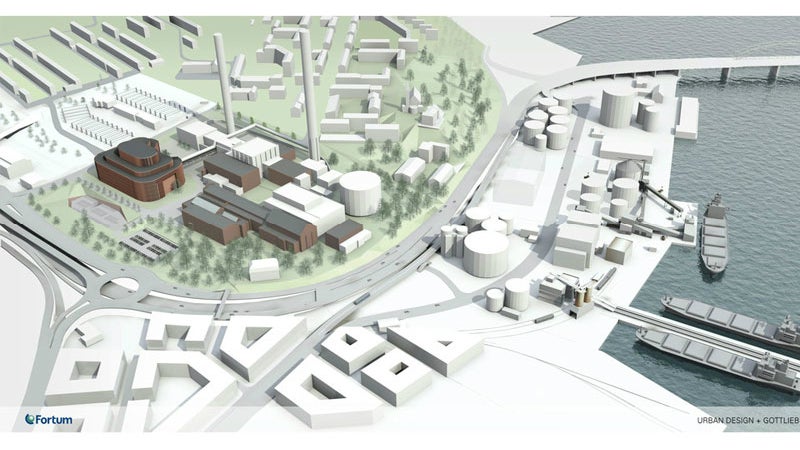 The co-generation plant is being developed by Fortum Värtan, a 50:50 joint venture between Fortum and the City of Stockholm. It is part of Fortum’s Roadmap 2020, which is aimed at producing heat and electricity in Stockholm using 100% renewable resources by 2030.

With an installed capacity of 280MW heat and 130MW electricity, it is touted to be the biggest facility of its kind in Sweden. The annual output capacity from the facility is rated at 750GWh electricity and 1,700GWh heat.

The heat produced from the biofuel CHP facility will be capable of heating approximately 190,000 average size apartments and the facility is expected to offset 126,000t of carbon dioxide emissions a year.

The construction phase of the new CHP plant generated between 800 and 1,000 jobs, while 35 permanent jobs are expected to be generated for the operations and maintenance of the facility.

The project also involved the construction of a 200m-long fuel loading pier and upgrade of infrastructure at Värtan Energy Port, with the inclusion of fuel storage and handling facilities.

The CHP plant will utilise feedstock including chips, bark, branches, tops and twigs sourced from Scandinavia, the Baltic countries and Russia. It has a feedstock processing capacity of approximately 12,000m³ a day and therefore requires delivery using three to four ships and five trains a week.

Contractors involved with the cogeneration project at Värtan

"The overall investment in the project is estimated to reach SEK 4.4bn ($517m approximately)."

Andridtz was contracted to supply the boiler and the flue gas cleaning system and the associated electrical and control systems. It further subcontracted Radscan Intervex to supply the flue gas condensation plant. Consulting services during the installation of these components were rendered by JD-Gruppen.

The steam turbine, generator, turbo-set control system, regeneration system and heaters were supplied and installed by Doosan Škoda Power, who is also responsible for the commissioning. It further subcontracted ORAB Construction to assemble the turbine’s pipe components.

The architect for the project was the joint venture of Urban Design, and Gottlieb Paludan Architects. The 3D building information model was created by Stig Bengtsson Architect.