A new tailor-made installation harbour was established at the Belfast Harbour to assemble wind turbines for the WoDS wind farm. Image courtesy of Belfast Harbour Commissioners.
Pacific Orca, a jack-up vessel, installed monopile foundations at the WoDS wind farm.
NKT cables manufactured and delivered the export and land cables for the wind farm.
Seahorse, a fallpipe vessel, placed a scour protection filter layer at the seabed of the wind farm.
Monopile foundation and transition pieces for the wind farm were manufactured by Baldt Industries. Image courtesy of Bladt Industries A/S. 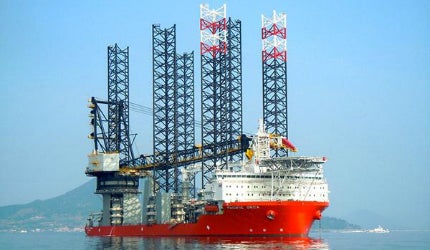 The West of Duddon Sands (WoDS) wind farm is a 389MW offshore wind power project located in the East Irish Sea, about 14km south-west of Walney Island off the coast of Barrow-in-Furness in Cumbria.

It is in close proximity to the Barrow offshore wind farm already in operation, and Ormonde and Walney wind farms, which opened in 2012.

The £1.6bn ($2.5bn) West of Duddon Sands wind project is being developed by a 50/50 joint venture (JV) between Scottish Power Renewables and DONG Energy. It is the ninth offshore wind project of the JV in the UK.

Once complete, the project will produce enough clean energy to power more than 300,000 UK households, while contributing significantly to the reduction of CO2 emissions.

The preliminary works of the WoDS project were completed by 2012 and included tendering, planning, design and geotechnical investigations.

Construction works started in 2012 and the first turbine was installed in September 2013. The plant began generating electricity in January 2014. It is producing power from four turbines currently and exporting it to the national grid. Full commissioning of the plant is expected by the end of 2014.

The application for the construction of the WoDS wind farm was filed in April 2006 and consent was granted on 23 September 2008.

Although the application was filed for the installation of 83 to 139 turbines with a plant capacity of 500MW, permission was granted for 108 turbines due to geological issues.

"Once complete, the project will produce enough clean energy to power more than 300,000 UK households."

Construction of West of Duddon Sands offshore wind farm was approved by both the JV partners in June 2011.

Two customised turbine installation vessels have been commissioned for the construction of the project. Seahorse, a Boskalis fallpipe vessel with 18,000t cargo capacity, is used to place a scour-protection filter layer at the seabed of the wind farm.

Pacific Orca, a heavy lift jack-up vessel with 1,200t lifting capacity, was used to install the monopile foundations and associated equipment for the project.

The foundation components came from Aalborg in Denmark to Belfast Harbour, which is the operational base for the construction of WoDS wind farm. Each foundation weighs 650t.

The offshore wind farm is spread over an area of about 66km2. It has location advantages in terms of first-rate wind resources, favourable water depths and the relative proximity of grid to the shore.

The wind farm will be installed with 108 Siemens SWT-3.6-120 three-bladed upwind turbines rated at 3.6MW each. The turbines are being installed in water depths ranging from 17m to 24m. They are supported by monopile foundations with a diameter of 5m to 6m. The turbines will have a rotor diameter of 120m and a hub height of 90m. A total of 42 turbines were installed as of January 2014.

The power generated by the individual turbines will be transmitted through a 33kV submarine cable grid to the 34kW/150kV offshore substation housed inside the wind farm.

The offshore substation was completed in May 2013.

Siemens was awarded the contract to supply, install and commission the wind turbines for the WoDS wind farm in June 2011.

Siemens will also provide maintenance for the turbines over a five year period. Belfast Harbour established a new tailor-made installation harbour, which has been rented to DONG Energy.

Boskalis Offshore, SMIT Marine Projects and Volker Construction International have been awarded contracts worth €115m ($149m) for the transportation and installation of the turbine foundations.

NKT Cables was awarded a contract worth €80m ($103.7m) to supply onshore and offshore high voltage cables for the wind farm.

Under the contract, the company manufactured and delivered 82km of 155kW export cables with 48 core optical fibres and 22km of 155kV land cables.

It will also deliver and install 155kV accessories for the onshore and offshore segments of the wind farm.

Ormonde offshore wind farm was developed in the Irish Sea, offshore of the UK, on an 8.7km² site.

How the next phase of wind power generation is set to be cheaper and more efficient.