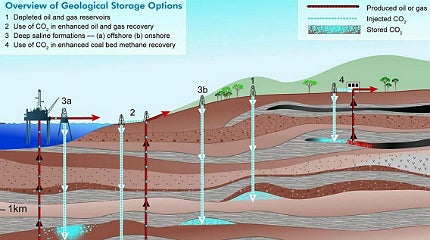 Global carbon dioxide (CO2) emissions from fossil fuel combustion reached a record high of 31.6 gigatons (Gt) in 2011, an increase of 1.0Gt, or 3.2%, over 2010 levels, with coal accounting for 45% of the total energy-related CO2 emissions. China, the world’s biggest emitter of CO2, made the largest contribution to the global rise with its emissions increasing by 9.3%, largely because of its high coal use.

And if this trend continues, the planet could be in big trouble. Indeed, Fatih Birol, chief economist at the International Energy Agency (IEA), was quoted by Reuters in May 2012 stating that: "The trend is perfectly in line with a temperature increase of six degrees Celsius (by 2050), which would have devastating consequences for the planet."

While he advocates cutting fossil fuel subsidies, boosting energy efficiency and moving away from coal to help meet global emission targets, another option supported by many in the industry is large-scale carbon capture and storage (CCS). Indeed, this is considered a viable strategy for significantly reducing CO2 emissions associated with coal-based electrical power generation and other industrial sources of CO2, according to the IPCC Special Report on Carbon Dioxide Capture and Storage (2005).

Moreover, the UK has recently released a roadmap, setting out how it will commercially deploy CCS in the country in the 2020s. And these two examples of support for the strategy are only scratching the surface.

How does CCS work and what are its drawbacks?

There are three stages to the process: capture, transport and storage. Carbon capture is the separation of CO2 from the other gases produced when fossil fuels are burnt for power generation and in other industrial processes. Once separated, the CO2 is compressed and transported to a suitable site for geological storage.

"The UK has recently released a roadmap, setting out how it will commercially deploy CCS in the country in the 2020s."

Finally, at its storage site, CO2 is injected into deep underground rock formations, often at depths of one kilometre or more. At this depth, the temperature and pressure keep the CO2 as a dense fluid.

However, there are problems with this approach. According to a recent report released by the National Research Council, entitled Induced Seismicity Potential in Energy Technologies, carbon capture and storage may have the potential for causing earthquakes, because significant volumes of fluid are injected underground over long periods of time.

"Earthquakes are caused by the movement of rock underground. This movement occurs when subterranean forces cause the sides of a fault to move relative to each other. The force of friction will usually keep faults from moving, but the injection of fluids underground, such as CO2 injected in liquid form, can lower this frictional force, allowing the rocks to move," explained David Dillon, the principal of David K. Dillon PE, LLC, a petroleum engineering consulting firm.

Additionally, although induced seismic events have not resulted in loss of life or major damage in the US, their effects have been felt locally. "This has raised some concern about additional seismic activity and its consequences in areas where energy development is ongoing or planned," Dillon emphasised.

Moreover, according to Mark Zoback, a geophysicist at Stanford University in California, if you trigger an earthquake, you are also threatening the seal of the CO2 store. "Our principal concern," he wrote in his report, "is not that injection associated with CCS projects is likely to trigger large earthquakes; the problem is that even small to moderate earthquakes threaten the seal integrity of a CO2 repository."

But that’s not to say CCS should be completely disregarded as a way of reducing CO2 emissions. Indeed, according to Zoback, there are sites around the world which can be used for CCS with a very small risk of earthquakes being triggered.

"Carbon capture is the separation of CO2 from the other gases produced when fossil fuels are burnt for power generation."

They need to be well sealed by impermeable overlaying strata, they should be weakly cemented (so as not to fail through brittle faulting) and porous, permeable and laterally extensive to accommodate large volumes of CO2 with minimal pressure increases, he stated in his report. "You also want to minimise the transportation distance of the CO2," he added. "You have to transport it as pure CO2, which is not easy. If it has any moisture in it, it will turn into carbolic acid, which is corrosive."

"There’s nothing wrong with the basic concept," he summarised. "We just have to rethink how it’s implemented."

Indeed, in order to significantly contribute to reducing the accumulation of greenhouse gases, CCS has to operate at a massive scale, in the region of 3.5 billion tons of CO2 each year, a volume roughly equivalent to the 27 billion barrels of oil currently produced annually around the world. But, according to Zoback, there simply aren’t enough sites in the world where CCS can be carried out safely to make this viable. Perhaps more importantly, even if there were, the industry would have to take into account the length of time and expense that would be involved in creating this huge CCS infrastructure.

So, what’s the solution? For Zoback, Birol was on the right lines. "The first thing we do is switch from coal to natural gas. I know it’s a cliché, but clichés do sometimes have merit to them," he remarked. "I see natural gas as a blue bridge to a green future; it’s not the end solution but it’s a temporary solution.

"At the same time, we invest in renewable energy – wind and solar, energy efficiency and we hope for a nuclear renaissance. Essentially, we buy time."

"There simply aren’t enough sites in the world where CCS can be carried out safely to make this viable."

But, as Zoback and Dillon were both happy to admit, none of this can be taken as gospel – yet. "We have no experience with CO2 injection at the large volumes currently projected for commercial carbon sequestration," Dillon admitted.

"If the underground reservoirs used for CCS behave in a manner similar to oil and gas fields, these large volumes have the potential to increase the pore pressure over vast areas. But due to the lack of experience with large-scale fluid injection for CCS, continued research is needed to fully assess the potential for induced seismicity if large scale CCS projects are to be operated safely in the future."

"We’re just raising this issue to make people aware of it," Zoback added. As his report concludes, though, CCS is undoubtedly an expensive strategy for reducing greenhouse gas emissions, and potentially too risky to make the difference to climate change which the world so desperately needs.

Calculating carbon – you can’t reduce what you can’t measure

18 Feb 2021
Registration is disabled.
We use cookies to ensure that we give you the best experience on our website. If you continue to use this site we will assume that you are happy with it.ContinueLearn more