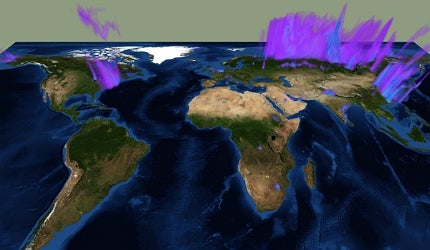 Rather than being calculated from the volume actually emitted or present in the air, carbon figures are estimated from energy used (plus factors such as transportation and livestock). That mainly depends on how much fuel we burn and the declared efficiency of the equipment burning it. The declarations are largely made by organizations themselves, though. With carbon credits now costing money, they are unlikely to overestimate.

"Improving the accuracy of emissions monitoring is a major aim of a new UK facility – the Centre for Carbon Measurement (CCM)."

The estimates are now however starting to be compared against CO2 concentrations measured on ground-based and satellite stations. But those measurements are difficult to produce, too. Instruments are spread across the globe, for example, and there is no guarantee that the ground-based measurements are consistent worldwide.

It is an important issue. The estimates are used to judge how successful companies – and countries – have been in trying to reduce emissions. They are also fed into the climate models that predict the sea level rise and other impacts. The importance of this whole process can only increase as the effects of climate change accelerate.

Improving the accuracy of emissions monitoring is a major aim of a new UK facility – the Centre for Carbon Measurement (CCM). As part of this, it has just helped to pilot a project to measure the amount of greenhouse gases in London. When available, the results will be interesting – a similar project run by instrument manufacturer Picarro in Davos (Switzerland) in January found the measured figures to be around 30% higher than previously estimated.

A step towards a low-carbon UK economy

CCM is involved in other metrology-related projects involving solar PV, fuel cells, carbon capture and ctorage (CCS) and carbon trading. The UK Government announced the centre with some fanfare, and boasts that the work is a key step on the way to a low-carbon economy.

With an overall aim of improving general confidence in measurement standards, work will include helping to set standards, test instruments and audit data. According to Jane Burston, CCM’s new head, the centre will focus on three areas, the first of which is to improve climate data.

Improving the accuracy of climate data

According to Burston: "The CCM pilot project is helping to quantify the uncertainties in measurements about the Earth, to give us a better idea about how confidently we can use the data for climate modelling or trading in the carbon markets. One application is to help measure more precisely the amount of greenhouse gases in the atmosphere."

That will be a challenge, since small signals must be extracted from a noisy background and human emissions must be separated out from natural sources. Natural sources dominate, but they are in the long term balanced by natural sinks (mainly driven by photosynthesis on land and at sea).

The main human sources are electricity generation, transportation and industry. Building-related CO2 emissions are the largest single contributor and, despite the relatively small area they take up, cities and metropolitan areas account for around 70% of human GHG emissions worldwide. The Picarro project found that emissions in Davos were 35% higher than official estimates, although they fell 40% during the actual World Economic Forum (likely due to locals leaving town and then security keeping cars off the roads).

A major use of the work will be to make the measurements for carbon credits more accurate – organizations will be spending billions of euros on credits, and emissions must be measured consistently worldwide. The centre’s work is part of the European Commission’s European Metrology Research Programme (EMRP), which is in turn part of a worldwide network working on global measurement harmonisation.

Carbon measurements during the London Olympics

Similar measurements made by NPL looked at London’s CO, CO2 and methane emissions during three months over the summer, which included the 2012 Olympics. Four Picarro sensors were placed around the city, plus an instrument on a bus measuring road-level concentrations, and one on a plane for higher altitude measurements.

"The main human sources are electricity generation, transportation and industry."

The sensors use high-accuracy cavity ring-down spectroscopy (CRDS), which uses a laser to effectively estimate the number of molecules of each gas in an optical cavity. The tests continually compare levels against calibration standards – small accurately known quantities of gas – and can measure CO, CO2 and CH4 concentrations down to parts per billion.

The project is a pilot of the EADS Astrium’s London Greenhouse Gas Emissions Measurement Services to assess city-wide GHG emissions. Calculating emissions levels requires factoring in the speed and direction of the winds moving through cities which transport the gas to the sensors and beyond. Those calculations are in turn fed into an atmospheric and transport model.

On one side the measurements help identify the sources of the emissions, and on the other they go to calculate national CO2 equivalent emissions. Astrium’s emissions model generates a 3D visualisation of the different sources, with uncertainties. With sensors costing around £40,000 each, though, the measurements are not cheap.

The second of the CCM’s three areas of interest is to verify claims made about low-carbon products. The NPL already has wide experience in testing insulation and other building components, and has developed a "Hot Box" that measures the overall heat transfer through large, non-homogeneous building structures.

"Similar measurements made by NPL looked at London’s CO, CO2 and methane emissions during three months over the summer."

Thermal transmittance (U-value, in W/m2K) can study thermal insulation and heat transfer across non-homogenous structures such as windows, doors and heavy masonry structures. The Hot Box is for laboratory measurements, but the centre also aims to develop tools for monitoring real-world performance.

Gareth Hinds, science leader for low-carbon technology, remarks that the CCM groups together several different areas of study. It is interested in how buildings and cities use their energy, particularly to study excessive water and energy use. Next-generation organic solar panels, solid-state LED lighting, smart grids and fuel cells are all also on the agenda. The centre will help set the energy content and purity of fuels (including bio-fuels). And it is working on improving fossil fuel plants themselves: in-situ monitoring will help improve plant efficiencies and extend their operational life. 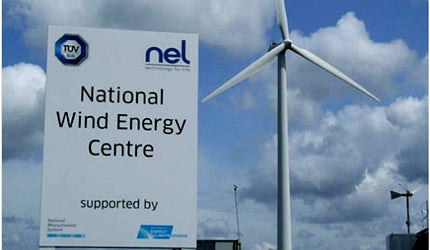 There are two types of carbon market, the first involving carbon offsetting. This is a ‘mechanism’ that actually just means Business as Usual – an accountancy trick that gives no guarantee of energy saving. The first round of Clean Development Mechanism (CDM) carbon credits largely went to projects that would have gone ahead anyway and verged on wide-scale fraud.

Proponents argue that procedures have been tightened since then, but the real problems are structural. At best, carbon trading diverts investments away from measures that could actually reduce energy waste in the rich countries. Western companies are likely to feel that they have done their bit by buying carbon credits, and that there is no money left for energy improvements. The cash itself has largely gone to big businesses that are free to use it to inflate the yearly bonus to company directors and shareholders.

The second carbon market involves emissions trading. Under this mechanism carbon capture and storage (CCS) is being promoted as the solution to the problems of fossil fuel burning. "Measurement for both carbon offsetting and CCS is about what is fit for purpose," says Burston.

"For example, currently it is not clear what measurements at what frequency are required to monitor CCS facilities and that is one of the things that will need to be worked on as pilot projects get underway. If these technologies are to provide the level of reductions we’re hoping for, then better measurement (which in these cases doesn’t mean ever increasing accuracy) will be an important contribution."

Due to lower costs and a smaller environmental impact, batteries are often the only viable option to store wind power.

A UK industry-led task force has made recommendations on how the cost of offshore wind can be reduced.