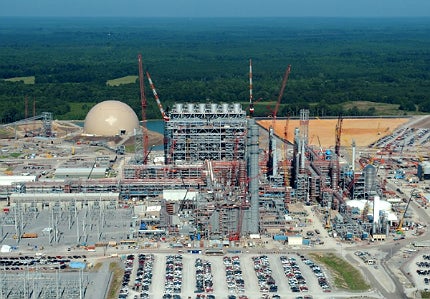 Firing the first salvo in what promises to be a bitter, protracted war with the US coal industry and intransigent House Republicans, President Barack Obama has made good on his threat to impose strict limits on greenhouse gas emissions from new natural gas and coal-fired power plants.

The Environmental Protection Agency (EPA) proposes to limit new coal plants to 1,100lb of carbon dioxide (CO2) emissions per megawatt (MW) hour – compared with the current average of around 1,800lb – and new gas-fired power plants to 1,000lb of CO2. Coal-plant owners who take advantage of an option to phase in the limits over a seven-year period will be subject to stricter limits.

"These carbon pollution standards are flexible and achievable," stated EPA administrator Gina McCarthy. "They pave a path forward for the next generation of power plants."

This is a personal crusade for the 44th President and his adversaries were given fair warning of his resolve in June when he instructed the EPA to bypass Congress and take direct action, to slash emissions by 17% from 2005 levels by 2020, as part of the administration’s Climate Action Plan.

"We limit the amount of toxic chemicals like mercury, sulphur and arsenic in our air or our water, but power plants can still dump unlimited amounts of carbon pollution into the air for free," the president said during an impassioned ten-minute speech at Washington’s Georgetown University. "That’s not right, that’s not safe, and it needs to stop."

In 2012, 40% of greenhouse gases, a major cause of global warming and ocean acidification, came from power plants; coal, the dirtiest of all fossil fuels, accounted for the majority of that figure.

"This is a personal crusade for the 44th President and his adversaries were given fair warning of his resolve in June."

Clearly, convincing the coal industry to clean up its act is a priority, but cost remains a major obstacle. While natural gas facilities should be able to meet the US Government’s stringent new emissions targets without recourse to new technology, the coal industry will likely have to invest in carbon capture and storage (CCS), a controversial process as yet unproven on a commercial scale.

CCS scrubs CO2 from power plant emissions before they reach the smokestacks using a process called post-combustion capture, and then stores it underground. Pumping CO2 into geological formations is a proven method in enhanced oil recovery and, according to the Intergovernmental Panel on Climate Change (IPCC), has potential to reduce atmospheric emissions by 80-90%.

However, the IPCC also estimates that CCS can increase the fuel needs of a coal-fired plant by up to 40%, and the overall cost of the energy generated from purpose-built facilities by as much as 91%.

A small-scale demonstration at the 1,300MW Mountaineer power plant in West Virginia, US, cost $100m. The utility provider, American Electric Power (AEP), claims taking CCS to commercial scale would have cost $700m, only half of which would have been paid for by the Department of Energy. AEP also pointed to the disproportionate drain on Mountaineer’s generating output.

"Twenty to 30% of the output of the plant goes to run the equipment at a commercial scale," said spokeswoman Melissa McHenry.

EPA regulation of greenhouse gases, as governed by the Clean Air Act, must be achievable using technology that is proven to work and is affordable; the EPA claims the Kemper plant under construction in Mississippi satisfies both criteria. The facility will employ state of the art gasification technology to capture two-thirds of its emissions, making it nearly as clean as a natural-gas plant.

Critics argue that, unlike many coal-fired facilities, Kemper is located close to an oil field where it can pump captured CO2 and store it, as well as being optimised to use local lignite, a lower grade of coal.

"Forty-three years ago, Congress passed a law called the Clean Air Act of 1970," said President Obama said in June. "The reasoning behind it was simple: new technology can protect our health by protecting the air we breathe from harmful pollution, and that law passed the Senate unanimously.

Not anymore. Around 39% of electricity in the US in the first half of 2013 was provided by coal-fired power plants. Despite foreign exports reaching record levels in 2012, the buoyant domestic market remains the US coal industry’s major revenue stream, and it is prepared to fight to protect it by bringing its considerable lobbying power to bear on Capitol Hill.

"In mandating that new power plants utilise technology that is not even commercially available, let alone affordable, the [EPA] is preventing abundant American coal from meeting America’s future energy needs," said Democrat Nick Rahall, a view echoed by many politicians from both parties.

"The result of this wrong-headed policy would be higher energy bills for families and businesses, reduced power reliability and energy independence for our nation and lost jobs for our coal miners."

The rules on new power plants will be subject to a 60-day public consultation period – the EPA received 2.5 million comments when it released its initial emissions guidelines in April 2012 – after which the coal industry and Republican lawmakers may decide to try and overturn the rules in court before (and even after) they are finalised in the fall of 2014.

In reality, the furore surrounding restrictions on new coal-fired power plants is something of a red herring. With natural gas increasingly popular and alternative sustainable energy sources, such as wind energy and biomass production, slowly gaining traction among politicians and the populace, new coal-fired construction projects are relatively rare.

"The buoyant domestic market remains the US coal industry’s major revenue stream, and it is prepared to fight to protect it."

"Natural gas and renewables are showing the cheaper, cleaner way to cut emissions," said Senator Ed Markey, a high-profile advocate of tighter limits on CO2 pollution. "Coal-mining companies and coal-burning utilities managed to put themselves in this situation, and these new rules might just provide the impetus for them to innovate their way out."

The real battle, as President Obama knows, will begin when the EPA takes the controversial step of imposing limits on greenhouse gas emissions from existing facilities, a far more costly, and politically risky, undertaking. The president has made it clear to advisors that he wants these rules in place by the time he leaves office in 2017.

To sugar the pill, the EPA has outlined a series of nationwide meetings involving the public, the coal industry and environmental groups. It is here that President Obama hopes to convince the sceptics and secure his legacy as a leader who made a real impact on US and global environmental policy.

"We’ve got to move beyond partisan politics on this issue," he said. "I want to be clear – I am willing to work with anybody – Republicans, Democrats, independents, libertarians, greens – anybody – to combat this threat on behalf of our kids. I am open to all sorts of new ideas, maybe better ideas, to make sure that we deal with climate change in a way that promotes jobs and growth.

"Nobody has a monopoly on what is a very hard problem, but I don’t have much patience for anyone who denies that this challenge is real… ultimately, we will be judged as a people, and as a society, and as a country on where we go from here."

Upgrading the US grid – building a smart self-healing grid

After two decades of development the arrival of a smart self-healing grid in North America is more of a possibility now than ever.

Germany’s vigorous support for renewable energy may have become more than the country can handle.