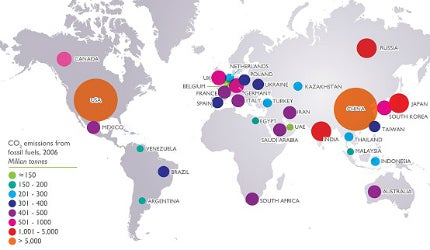 China has disappointed environmentalists in recent months after revealing that it burnt 95m tons of coal in 2011, despite leading the world in renewable energy growth in the same period, tripling solar generation capacity and connecting 18GW of new wind power to the grid.

The nation is struggling to cap the rise in coal consumption as local governments worry about the potential restrictions on economic growth if the commodity disappears.

But with the support of Australia – whose National Low Emissions Coal Initiative has presented $20m in funding – China’s priorities for climate change won’t be put on the back-burner just yet.

Together, the countries have formed a new plan to make coal clean.

The Australia-China Joint Coordination Group on Clean Coal Technologies (JCG) was launched on 9 July 2012, to facilitate the introduction of low emissions coal technologies into the market.

The priority for JCG is to develop a feasibility study for an industrial-scale, 600MW post combustion capture project with carbon capture and storage (CCS) in China.

The countries have signed a Memorandum of Understanding, and work on the new $12m project is now underway, despite forecasts by the International Energy Agency (IEC) that none of China’s coal-fired power plants will include CCS within the period of the twelfth Five-Year Plan (2011-2015).

The Minister for Resources and Energy Martin Ferguson welcomed the initiative: "Australia and China are committed to finding ways of reducing carbon emissions from burning fossil fuels."

"Given Australia is the largest coal exporter in the world and China comprises half of global coal consumption, it is vital that we work together to develop technologies that can reduce greenhouse gas emissions associated with coal," Ferguson said on the day the venture was launched.

Australia and China’s dependence on coal

The relationship between Australia and China has not always been rock solid.

China’s demand for coal once helped Australia cling on to a stable economy while other nations slipped into recession, but it’s appetite for the commodity began to fade in the first few months of 2012.

In March, China Premier Wen Jiabao announced that the nation’s economy would grow by 7.5% in 2012, down from eight percent last year, adding that exports and imports would rise by only ten percent in 2012, down on growth of 20% seen the year before.

So, what chance do the countries have in collaborating in a new joint partnership such as the JCG?

Well, the IEC predicts that coal use, particularly in the power sector, will remain critical for energy security in China, since much of the existing power plant capacity is new, having been introduced in the last decade, and will be available for operation until 2050.

In Australia, coal-fired electricity generation accounts for around 75% of the country’s electricity and remains an important part of the energy mix.

It seems the countries are facing similar dilemmas – they both rely on coal and are dependent on one another for its supply and demand – but they also have a shared interest in reducing environmentally damaging emissions.

"In Australia, coal-fired electricity generation accounts for around 75% of the country’s electricity and remains an important part of the energy mix."

China – the world’s biggest polluter – has set a target to reduce carbon intensity by 40 – 45% from 2005 levels, while Australia is aiming for at least a five percent decrease in emissions from 2000 levels by 2020.

With this in mind, it is in the interest of both countries to collaborate in the deployment of low emissions coal technologies, such as post-combustion capture, oxy-fuel combustion and gasification.

Australia in particular is keen on promoting carbon capture storage, especially at a time when polluters are expected to pay A$23 ($24) per metric ton of carbon until 2015, a levy set by the government in July 2012.

The draft Energy White Paper released at the end of 2011 highlights the government’s priority on the development and demonstration of CCS technologies, and the importance of harmonising CCS-enabling legislation and regulations across jurisdictions. It is anticipated that a final paper will be released later in 2012.

Gasification is another process in which coal can be cleaned. In integrated Gasification Combined Cycle systems, coal is not combusted but instead reacts with oxygen and / or steam to form a syngas.

The power derived from gasification and combustion of the resultant gas is considered to be a source of renewable energy if the gasified compounds were obtained from biomass.

A 450MW coal-fired power station has been built at Tarong North, next to the existing Tarong Power Station on the D’Aguilar Highway in Queensland, Australia.

Australia and China are also looking to develop oxy-fuel combustion as a technology to burn coal using pure oxygen instead of air as the primary oxidant.

Oxygen-fired plants are favoured by some because they are able to reduce the mass and volume of the CO2 rich flue gas by 75%, and because the flue gas volume is reduced, less heat is lost in the flue gas.

What’s more, the concentration of pollutants, such as sulphur dioxide; nitrogen oxides and particulates, in the flue gas is higher, making separation much easier.

A number of processes are also available to remove unwanted mineral content and enable the coal to burn more efficiently.

One technique involves feeding the coal into barrels containing a dense fluid which causes the coal to float, while unwanted material sinks and is removed from the fuel mix.

When burned, coal is the dirtiest of all fossil fuels, but if Australia and China can make the most of new technologies, the commodity they so desperately depend on may scrub up well.

Fairly unscathed by the disaster in Fukushima, China still has the world’s most hard-line nuclear programme. Aiming to have more than 100 reactors in operation by 2020, the country is on its way of becoming a self-sufficient and sustainable nuclear player, but challenges such as security and safety issues and a lack of skilled professionals still stand in the way of China’s successful nuclear expansion.

South Korea’s power industry is facing a major challenge as it looks to incorporate cheap fuel into the mix. The sector must drastically reduce its energy intensity while lowering its carbon emissions if it wants meet government-set targets. Could low-grade coal be the solution?