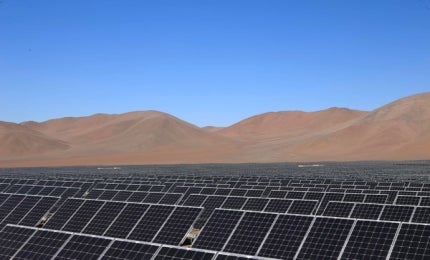 The 100MW Amanecer Solar CAP plant located in Copiapo, Chile, was built, developed and interconnected by SunEdison subsidiary Amanecer Solar. The plant was constructed under a 20-year contract for difference (CFD) agreement with CAP Group, the biggest steel producer in Chile and will power CAP’s mining projects in the area.

Construction on the $250m project began in August 2013 and an inauguration ceremony was held in June 2014. It is the biggest photovoltaic solar power plant in Latin America and one of the world’s biggest solar power plants.

The photovoltaic power plant is situated 37km from Copiapo in the Atacama Desert at an altitude of 1,165m from sea level. The plant consists of more than 310,000 photovoltaic modules spread across 250 acres (101ha).

The annual generation capacity of the plant is expected to be up to 270GWh upon achieving full functionality. It would take more than 71 million litres of fuel to generate the same amount of energy using diesel.

The site can be accessed through state road C-309 and the construction for an additional direct-access road is being planned.

Sunlight is converted into direct current (DC) with the help of the photovoltaic modules. An inverter converts the DC power into alternate current (AC) popwer, which is transmitted to the Sistema Interconectado Central’s (SIC) network.

The transmission line requires a right-of-way 370m long and 23m wide on each side that is situated on government land south-west of the project site. The developers have applied to the Ministry of Bienes Nacionales, which is in charge of public lands in Chile, to gain the right-of-way.