Callide Oxyfuel Project technologies.
Schlumberger is one of the partners for the oxyfuel demonstration project. The CarbonWorkFlow process helps assess and manage risk and to optimise CO2 storage projects.
Australia's energy resources.
The Callide A Project will retrofit the coal-fired power plant with an oxy-combustion boiler. 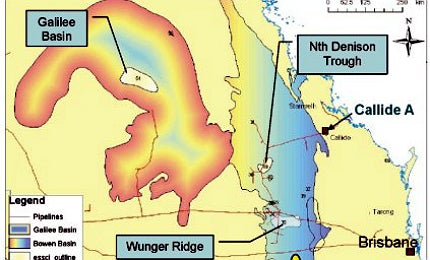 Callide power station is located in the Callide Valley, 18km east of Biloela in central Queensland, Australia. The Callide site has three power stations, namely Callide A, Callide B and Callide C.

Callide B and C are now on line, generating enough power for nearly two million homes. Callide A is in storage, with the fourth unit being retrofitted for the Callide Oxyfuel Project, a clean coal demonstration project.

Callide A and B are 100% owned by CS Energy Ltd. Callide C is a 50/50 joint venture between CS Energy and InterGen.

Callide B and C operate as base load stations with nearly 200 people working on the site full time. The power station uses about six million tonnes of black coal a year, conveyed from the nearby Callide Mine.

"Callide B and C are now on line, generating enough power for nearly two million homes."

Originally built in 1965, the 120MW Callide A has four 30MW units designed to supply power at 132kV. The turbine was supplied by Parsons, and the boiler by Mitchell Engineering.

Steam temperature was designed at 460ºC and pressure at 4300kPa. Callide A is the world’s largest remote controlled coal-fired power station.

It was refurbished in 1998 and is presently in storage. CS Energy is partnering with five other organisations on an A$206m clean coal demonstration project. The project will retrofit oxyfuel technology to one of the Callide A boilers.

That involves burning of pulverised coal in a boiler with a mixture of oxygen and recirculated waste gases to create a high concentration of CO2 in the gases exiting the boiler.

The CO2 will then be captured, purified and compressed to liquid form. The liquefied CO2 is ready for transport to an underground storage site for geosequestration. Suitable sites are sedimentary basins that have permeable rock to absorb the CO2, with a natural upper seal of non-permeable rock.

Depleted gas fields have high CO2 storage potential, as they have characteristics that enabled natural gases to be stored there for millions of years.

The project, which is a joint venture between CS Energy, the Australian Coal Association, Xstrata Coal, Schlumberger, JPower, Mitsui and IHI Corporation, has received financial support from the governments of Australia, Queensland and Japan.

Callide B generates 700MW from two 350MW units and was commissioned in 1988. The turbine came from Hitachi and the boiler from Babcock Hitachi. Steam temperatures and pressures are higher than for Callide A, at 539ºC and 17700kPa.

"Callide A and B are 100% owned by CS Energy Ltd. Callide C is a 50/50 joint venture between CS Energy and InterGen."

Callide B, in the past, has operated continuously for 477 days, creating a record for the longest operation.

The 900MW Callide Power Plant (Callide C) was commissioned in 2001 at a cost of A$800m. Callide C has two 450MW units and, like Callide B, generates power at 275kV. Toshiba supplied the advanced cycle steam turbine, and IHI the boiler.

Steam temperatures and pressures were raised again over Callide B, to 566ºC and 25,100kPa. It is managed by Callide Power Management, a joint venture company.

Callide C was the first power station in Australia to use supercritical boilers, which have higher thermal efficiencies than conventional coal-fired technology. Callide C uses coal from the nearby Anglo Coal Callide Mine, and draws water from Awoonga Dam near Gladstone.

Callide C has consistently achieved 94% availability since the most recent big outage in mid-2006. The unit’s environmental controls include real-time emissions monitoring with operator alarms and self-tuning capabilities within the control system.

CS Energy is an Australian power company that owns and operates three power stations in Queensland, generating almost 3,000MW in total. The company participates in the national electricity market, and is the main electricity generator for the remote regional market in Queensland’s North West Minerals Province.

CS Energy was established on 1 July 1997 following the restructuring of the Queensland electricity supply industry.

In a joint venture with CS Energy, Callide C has augmented the Callide water supply by developing the Stag Creek Pipeline project. The project was completed in November 2005. It reduces the diversion of water from nearby Awoonga Dam and increases community water allocations.