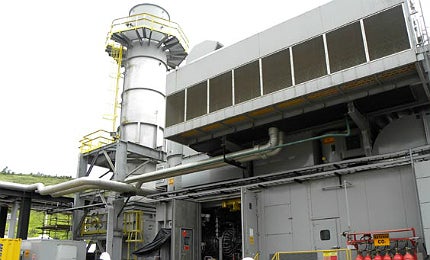 The plant has an installed capacity of 87MW, which is enough to power a city of 150,000 inhabitants. It is connected to Brazil’s electricity grid and has power supply contracts for the next ten years.

“The plant has an installed capacity of 87MW, which is enough to power a city of 150,000 inhabitants.”

The plant is a simple-cycle, natural gas-type equipped with two GE LM6000 aero-derived combustion turbines and Alstom generators. In order to enable the use of ethanol, one of the 43.5MW-powered combustors was converted by GE. Following the successful commissioning of the first turbine conversion Petrobras awarded GE another contract in October 2010 to convert the second turbine of the plant.

The turbine conversion involved replacing combustion chambers and injector nozzles along with installing peripheral equipment, such as a receipt system, tanks, pumps and filters. The dual fuel feature improved the plant’s energy security and reliability.

A five-month demonstration test was conducted by Petrobras under an agreement with GE to validate ethanol as an alternative source of fuel and confirm that emission levels are within expected limits.

The demonstration was carried out in three phases. The first and second phases evaluated engine performance and environmental impact, respectively. In the third phase the performance of the equipment when running on ethanol was investigated and examined. The testing was completed in May 2010. The test results revealed no difference in turbine performance.

Environmental impact of the ethanol-fired facility

To measure NOx, carbon oxide and sulphide oxide emissions, the Centre for Natural Gas and Renewable Energies Technologies installed a monitoring station in the Juiz de Fora thermal power generation park. The park has an installed capacity of 7,028MW.

“It is connected to Brazil’s electricity grid and has power supply contracts for the next ten years.”

Ethanol is an emerging low-carbon alternative of electricity generation in Brazil, which is the second-largest ethanol producer in the world. In 2008, Brazil produced 26.9 billion litres of ethanol. The country initiated the use of ethanol as a substitute for automobile fuel in the 1970s when it established the Proalcool programme.

One of the most dynamic emerging economies of recent years, Brazil has gone to some extreme lengths to protect itself from a near perfect storm of economic dangers.