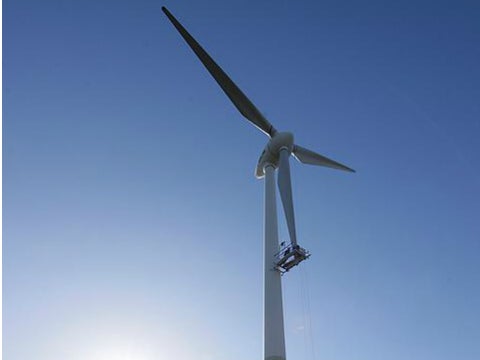 The Ironwood Windpower Project is a 500MW wind farm built in Kansas, US. The project is being developed in phases with the first phase producing 168MW of wind energy.

Ford County Commission awarded conditional use permits for the project in August 2010. Phase 1 construction was completed in October 2012 with commercial operations beginning in the same month.

It is jointly owned by Duke Energy Renewables, a unit of Duke Energy, and Sumitomo Corporation.

The Ironwood project is Duke’s first wind farm built in Kansas and the tenth in the US. The company has focused on wind and solar power businesses since 2007, investing more than $1.5bn.

The project generates sufficient electricity to power more than 50,000 homes. Westar Energy entered an agreement with Duke Energy to purchase the entire power for a period of 20 years.

“The Ironwood project is Duke’s first wind farm in Kansas”

The Ironwood wind farm is spread over an 18,603-acre area in the Ford and Hodgeman counties of Kansas. The site consists primarily of agricultural land and is a good wind resource.

Terracon Consultants carried out the environmental assessment of the site for the project.

First phase of the project includes 73 Siemens wind turbines, rated at 2.3MW each. Each turbine features three blades and has a hub height of 262ft. The rotor diameter of the turbines is 331ft. The turbines feature a nacelle containing the gearbox and other equipment. They are placed in multiple rows oriented in an east-west direction to optimise energy generation.

A 34.5kV electrical collection system, a substation, meteorological towers and an operations and maintenance building is built as part of the project. The electrical collection system collects and transfers electricity generated at the site to the project substation. It collects electricity through underground cables. The meteorological towers ensure optimal performance of the turbines.

A 2.4km overhead transmission line is laid at the site to transfer electricity generated to the grid network. Underground communication cables were also laid to enable communication between the operators and those working at the turbines. The project included construction of access roads at the site.

Duke ensured that the construction activities would have minimal impact on the agricultural area at the site.

Future phases of the project will use turbines with capacity ranging from 1.5MW to 3MW. The hub height of these turbines will be 262ft and rotor diameters will range from 252ft to 335ft.

Westar is responsible for transferring the electricity generated by the wind farm to the grid network. To accomplish this, it has entered into interconnection agreements with Southwest Power Pool.

“Kansas has the potential to generate 10GW of wind power.”

Wind power is a prominent source of electricity in Kansas due to the presence of abundant natural resources. The region has the potential to generate 10GW of power from wind.

The Ashtabula Wind I, II and III Energy Center is the largest wind farm in North Dakota, US.

The Papalote Creek Wind Farm is located in San Patricio County, 30 miles north of Corpus Christi in Texas, US.