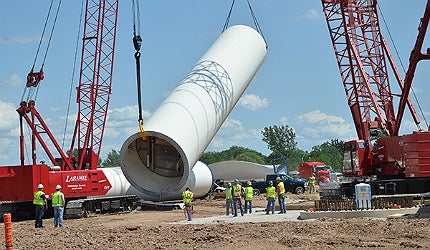 Lake Winds Energy Park is an onshore wind farm being built in southern Mason County in Michigan, US. The power station will deliver up to 100MW of green electricity to consumers. It is expected to be commissioned in October 2012.

The project is being developed and will be operated by Consumers Energy, a division of CMS Energy and supplier of natural gas and electricity in Michigan. It is the first wind power project of Consumers Energy.

The wind farm’s development is estimated to have cost $235m, of which approximately 75% will be spent on purchasing construction stuffs, wind turbines and towers, substation equipment, transformers and other capital equipment.

"Mason County was chosen for the construction of Lake Winds wind farm after examining 18 other potential sites in Michigan."

Consumers Energy is honoured for being the largest supplier of green energy in Michigan. Approximately five percent of the electricity that it supplies in the state is generated from renewable sources.

In 2007, the company, in its 25-year Balanced Energy Plan, committed to achieve ten percent of its power supplies from renewable sources by 2015. In order to achieve this, the company decided to harness the state’s wind energy and hence planned to build two wind farms in Michigan.

The first wind farm, being set up in Mason County, will enable Consumers Energy to generate eight percent of its total electricity from renewable sources.

The second wind farm, Cross Winds Energy Park, will be built in Tuscola County. The 150MW facility, when commissioned in 2015, will allow the company to meet or exceed the state’s mandated goal of ten percent by 2015.

The Lake Winds project includes installation of 56 Vestas V100-1.8MW turbines. The turbines are designed as per the specifications of International Electrotechnical Commission Standard 61400-1 (IEC 61400-1).

"The power station will deliver up to 100MW of green electricity to consumers."

The turbines will be installed across an area of around 15 square miles in the Riverton and Summit Townships. About 18% of the 56 wind turbine generators will be located in Summit Township, with the remainder in Riverton Township.

Each wind turbine generator will be fastened to a 95m high tubular steel tower. The overall height of the entire setup will be 145m, including blade length.

A Supervisory Control and Data Acquisition (SCADA) system will be installed to supervise and control the wind turbines. Though the turbines can be operated and controlled remotely, there will be full-time turbine technicians for onsite support.

The wind turbine generators will be connected to a new substation via a network of 34.5kV underground transmission lines. The transmission cables will be laid at least 48in below the ground so that they will not interfere with agricultural practices.

The substation, to be built on 5.2 acres of land in Summit Township, will escalate the voltage from 34.5kV to a transmission voltage of 138kV. The stepped-up current will be transmitted to the nearby grid connection point at Pere Marquette Highway.

Vestas-American Wind Technology was contracted in July 2010 to supply the wind turbines for the project.

The engineering, procurement and construction (EPC) contract for the Lake Winds project was awarded to White Construction, a wholly owned subsidiary of Infrastructure and Energy Alternatives (IEA), in November 2010.

The Mexican transformer manufacturer Prolec GE, a joint-venture between Xignux and General Electric (GE), was contracted in November 2010 to supply electric transformers for the new substation.