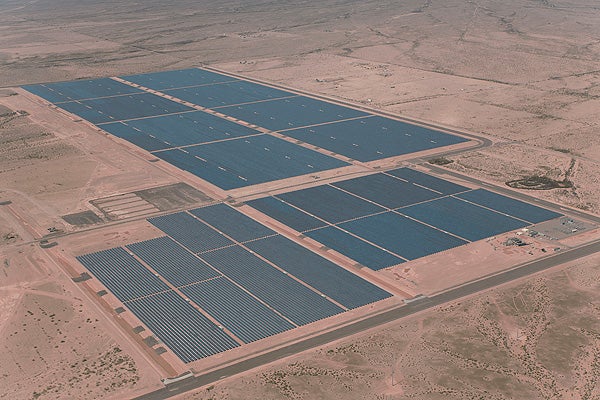 Mesquite Solar 1 is a 150MW solar power plant located at Maricopa county of Arizona, US. The plant commenced operations in January 2013. It is expandable, up to 700MW capacity, making it the largest photovoltaic solar power plant in North America when complete.

The plant is owned by Sempra US Gas & Power and developed by Zachry Holdings. The investment on the first phase of the plant was $600m.

The plant currently generates 350GWh of electricity, which is sufficient to supply for 56,000 households and offset approximately 200,000t of greenhouse gas emissions per year.

The project is developed on a 4,000 acre site in Maricopa County located 40 miles to the west of Phoenix. The plant covers an area of 920 acres.

The first phase is equipped with 800,000 Suntech multi-crystalline solar panels using Pluto cell technology. The advanced technology helps in achieving an efficiency of 20.3% and it doesn’t need water in the power generation process.

"The advanced technology helps in achieving an efficiency of 20.3% and it doesn’t need water in the power generation process."

The panels are installed on the Schletter’s ground mount FS system. The ground mount system is supported by approximately 85,000 steel piers.

Mesquite Solar 1 is equipped with Solaron PV inverters and SafeGuard service program. The Solaron inverter is a 500kW inverter configured as 2MW substation and attached with SafeGuard Plus Inverter uptime programme.

The liquid-cooled inverter uses lesser power for generating electricity with higher efficiency. It is transformer-less, and captures maximum solar heat and increases the amount of power available to the grid.

The major construction works included the transportation and installation of solar panels and inverter system, and construction of transmission lines.

In December 2011, 48MW from the Arizonian project was grid connected and the full 150MW was connected in January 2013.

The plant shares the generator interconnection facility with its affiliate, Mesquite Power. The generator facility is used to interconnect with the Hassayampa switchyard through two 500kV tie lines.

Generation and sale of power from Mesquite Solar 1 plant

The panels convert the solar heat to DC electricity, which is converted into AC power by the inverters. The AC power is transferred to the transformers located at the plant site. The substation steps up the power and transmits it to the grid.

"Suntech was awarded the contract to supply 800,000 solar panels for the plant."

The entire electricity generated from the Phase 1 will be purchased by Pacific Gas and Electric Company under a 20-year power purchase agreement.

The Federal Financing Bank provided $337m loan for the development of the first phase of Mesquite Solar project. The US Energy Department provided the loan guarantee.

The Engineering, Procurement and Construction contract for the Mesquite Solar 1 power project was awarded to Zachry Holdings.

Suntech was awarded the contract to supply 800,000 solar panels for the plant. It manufactured the panels at its Goodyear manufacturing facility at Arizona.

The subcontract for installing the panel foundations was awarded to HT Solar Power. Advanced Energy supplied the inverters system under a subcontract.