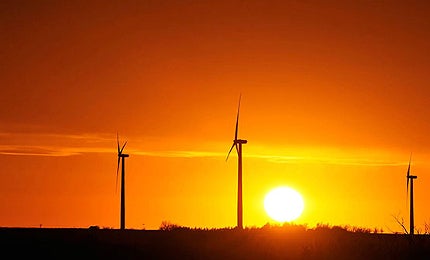 The 201MW Post Rock Wind Farm is located in Ellsworth and Lincoln counties of Kansas, US. Wind Capital Group, a US-based subsidiary of Irish renewable energy firm NTR, is the owner and developer of the wind power project.

The construction of the $375m Post Rock Wind Farm started in September 2011 and was completed by October 2012. The wind farm was officially inaugurated in November 2012.

In December 2012, GE Energy Financial Services teamed up with MetLife and Union Bank to buy a stake in the wind farm for $247m. Wind Capital Group still retains substantial equity and is the managing member of the project.

The wind farm has the potential to serve electricity needs of 70,000 households while offsetting 815,000t of greenhouse gas emissions a year.

"The construction of the $375m Post Rock Wind Farm started in September 2011 and was completed by October 2012."

The Post Rock Wind Project was originally undertaken by Hilliard Energy. The project was later acquired by the Wind Capital Group, which is focused on wind energy business opportunities in the US.

The Engineering Procurement and Construction (EPC) contract for the wind energy project was awarded in May 2011. Construction works began in late 2011 and took one year to complete. The project created 150 jobs during construction.

The financing for Post Rock Wind Farm was completed in January 2012. The project was entirely financed through a debt of more than $350m, which was provided by a group of international lenders, including BayernLB, Rabobank, Nord LB and Union Bank. It comprised of a construction loan worth $293m, an in term loan of $63m and a $20m letter of credit facility.

Post Rock Wind Farm spreads across an area of 23,000 acres (9,307ha) in Ellsworth and Lincoln counties of Kansas. The project site is located 80 miles (128.7km) away from Wichita, the largest city of Kansas.

Post Rock Wind Farm consists of 134 three-bladed GE wind turbines, each one with a rated output of 1.5MW. The height of the turbines is around 300ft and the blade length is 37m.

"Post Rock wind farm spreads across an area of 23,000 acres (9,307ha) in Ellsworth and Lincoln counties of Kansas."

The rotor diameter of each turbine is 82.5m. The rotor speed is guided by electric drive pitch control with battery backup. The turbines are also equipped with aerodynamic braking systems. The turbine towers are mounted on spread-footing foundations and are equipped with in-tower wiring.

Power generated by each turbine is transferred to a 34.5kV underground collector system that runs 24.6 miles (39.5km) in length. It is then stepped up at the 34.5/230kV substation.

RMT was chosen as the EPC contractor for the civil and electrical infrastructure of the Post Rock wind project. The scope of the contract included construction of 19.6 miles of access roads, turbine foundations, tower erection and the associated electrical infrastructure, including the in-tower wiring, underground cabling, the step-up substation and the new transmission line.

General Electric supplied the wind turbines for the project. It will also provide operation and maintenance services for the wind farm.

The 143MW Catalina Solar Project, located in Kern County of California, is being developed by EDF Renewable Energy (formerly known as EnXco).

The Ironwood Windpower Project is a 500MW wind farm built in Kansas, US. The project is being developed in phases with the first phase producing 168MW of wind energy.