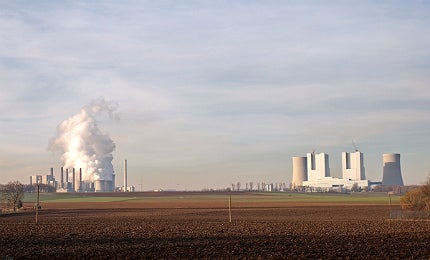 As the effects of climate change become ever more noticeable, there are few who would dispute the argument that renewable power sources represent the world’s best path to sustainable and environmentally responsible energy generation. But while our means of drawing power from the Earth’s wind, solar and tidal resources are improving, there remains a significant energy gap to overcome before renewables can ramp up to the required scale.

A number of developed nations had planned to launch large-scale nuclear power projects to bridge this gap, but last year’s Fukushima disaster in Japan has stymied many of these schemes. Fukushima has intensified the perception of the nuclear reactor as a risky proposition, and the result is a resurgence in coal and gas-burning power plants as a cost-effective, but environmentally damaging, stopgap on the way to renewables. The amount of coal used for power generation around the world rose by 5.4% in 2011, representing 30% of the global energy mix, higher than at any point since 1969.

Fukushima seems to have prompted a turnaround on nuclear power even in South Korea, where nuclear plants account for 30% of the country’s output. With older nuclear plants due for closure and plans for new reactors in doubt, South Korea is considering increasing its already large imports of coal to make up the deficit.

Despite the fact that fossil fuel power plants are among the world’s largest contributors to global carbon emissions, they remain the key component to large-scale power generation.

Governments are acknowledging that while renewables are on their way, our current reliance on highly polluting energy sources is entrenched enough that coal and gas have to be seen as vital stepping stones to a clean energy future.

Germany’s stated ambition to move away from nuclear power, announced after the Fukushima incident last year, as well as its long-term goal of reducing greenhouse gas emissions, has ironically prompted a significant uptake of coal power generation. Although the country plans to boost renewable power to 35% of its energy mix by 2020 and 80% by 2050, its short-term future seems dominated by coal. The latest manifestation of this shift is the start-up of RWE’s €2.6bn, 2,200MW coal-burning power plant in Grevenbroich, called BoA 2&3, in August 2012.

“BoA can ramp its power output up and down by up to 500MW within 15 minutes.”

The German Government is aiming to complement BoA with another 8,800MW of new coal and gas-fired power plants, to be used as efficient modern replacements for more polluting plants that are nearing retirement age. For some observers, reducing fossil fuel emissions in the long-term with a massive uptake in coal-fired power in the short-term is a counter-intuitive step too far.

“[German Chancellor] Angela Merkel’s policy has created an incentive structure which has the effect of partially replacing nuclear with coal, the dirtiest fuel that’s responsible for much of the growth in the world’s greenhouse-gas emissions since 1990,” Oxford University energy policy professor Dieter Helm told Bloomberg in August, adding that the new power stations meant that the country was locking itself into coal-fired generation for the next 30 years.

The choice of coal over less-polluting natural gas to complement Germany’s gradual transition to renewables has been attributed to the falling price of emissions permits, which makes it more economical to burn cheap coal and pay for the permits rather than opt for cleaner, pricier gas-fired technologies.

Even worse, from an environmental standpoint, is the continued predominance of lignite, a low-grade soft coal that produces more harmful emissions than higher-grade coals. Germany is a leading producer of lignite, which is used in many of the country’s coal-fired plants, including the new BoA facility.

Nevertheless, there is an underlying strategy to the European nation’s coal uptake. As older plants are replaced by newer units such asBoA, modern day technology is helping to reduce traditional inefficiencies and emissions. Taking BoA as a model of Germany’s new generation of coal-fired plants, this twin-unit power station boosts efficiency up to around 43%, a significant jump on the standard fossil fuel efficiency rating of 30-35%.

In a statement issued after the launch of BoA, RWE also noted that the plant would produce the same volume of power (about 16 billion kilowatts of electricity each year, enough to power more than three million homes) while reducing annual carbon emissions by more than six million tons. Replacing the country’s portfolio of ageing power plants with advanced facilities like BoA, while still environmentally damaging, would represent a significant reduction of national CO2 emissions.

Output flexibility is also a key aspect of the new plant, and has emerged as a recurring theme in the latest generation of fossil fuel power plants in general. BoA can ramp its power output up and down by up to 500MW within 15 minutes based on demand, a major improvement on older plants, which can take hours to make even slight changes to output.

This flexibility allows the plant to work in harmony with Germany’s growing renewable power sources, reducing output when the sun is shining and the wind is blowing, then increasing it when intermittent renewables aren’t firing on all cylinders. In this sense, even a power source as dirty as lignite can play a major part in the development of renewables, providing grid reliability and gradually scaling back as renewables are able to take more of the strain.

“The new power plant is an impressive example of how the high levels of efficiency of modern coal and gas-fired power plants not only help to reduce carbon emissions but can also make an outstanding contribution to the success of energy industry transformation,” said Germany’s Federal Environment Minister Peter Altmaier at the plant’s opening event.

This same load flexibility is being leveraged to greater effect in other parts of the world. The chief criticism of Germany’s next-gen fossil fuel plan is its reliance on coal rather than natural gas, which is generally seen as a victory of economic considerations over environmental responsibility. The new Lodi Energy Center (LEC) in California’s Central Valley, which also opened in August, shows the benefits of using similarly high-tech, flexible technology in conjunction with natural gas.

“[LEC’s] use of natural gas allows it an efficiency of more than 57%, limiting emissions to around 800lbs of CO2 per megawatt-hour of electricity.”

While the 300MW natural gas combined cycle power plant is not on the same scale as the massive BoA facility, its use of natural gas allows it an efficiency of more than 57%, limiting emissions to around 800lbs of CO2 per megawatt-hour of electricity compared to more than 2,000lbs produced by an efficient modern coal-fired power plant.

LEC, based on Siemens Energy’s Flex-Plant power island, is able to power up to full load within an hour, with flexible output to work in conjunction with renewable power sources such as wind and solar.

“This innovative fast-ramping gas-fired plant was specifically designed by Siemens as a solution to balance fluctuations on diverse power grids managing both renewable and traditional energy sources,” said Siemens Energy’s Mario Azar. “Its clean footprint and versatility makes it an ideal solution to the growing need for stable and environmentally-friendly power sources in the US and around the globe.”

With major projects like these creating compelling proof-of-concept cases for the utility of high-efficiency flexible fossil fuel power plants, coal and natural gas look set to continue their rise as an imperfect but increasingly efficient bridge between the world’s hydrocarbon-heavy present and its renewable future. For better or worse, as other major companies like GE start establishing their own lines of flexible power generation technologies, our fossil fuel-driven economy may have found a way to gradually phase itself out, in its own time and on its own terms.

Calculating carbon – you can’t reduce what you can’t measure

Carbon capture and storage is currently touted as a viable strategy for reducing the environmental impact of CO2 emissions, but recent research suggests there could be more problems than previously realised.

Has the Japanese Crisis Killed the Market for Uranium?