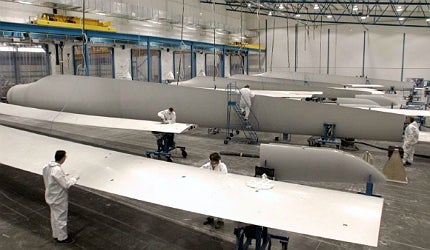 “Private sector investment is essential to the success of renewable energy,” says Jim Hubbard, economics policy officer at RenewableUK. With most forms of low-carbon power still at a relatively early stage of development, many believe it holds the key to the economic viability of green energy in the long-term.

As Werner Hoyer, president of the European Investment Bank, explained at August’s Handelsblatt renewable energy conference: “If we want to switch to renewables in Europe on a permanent basis, the lion’s share needs to come from the private sector.”

What is true for Europe, of course, holds equally true elsewhere too, and that will inevitably lead to competition for investors – and a raft of incentives and inducements at the national level, to attract them.

Emission and energy targets have had positive effects

“Investors are keen to continue ploughing more into wind and marine technologies.”

“The more government can do to reassure investors’ concerns, and to offer a clear vision of where they are going, the better,” Hubbard says, describing ‘certainty’ as the most effective tool to encourage the level of private investment required.

He points to the impact setting specific targets for green power can have on promoting appropriate technologies and pulling in funding.

“Renewable energy targets for 2020 have had a hugely positive effect on investment within renewable energy. Specifically the 2020 targets have been responsible for more rapid deployment of wind that has the potential to stabilise energy prices for consumers.”

Hubbard says investors are keen to continue ploughing more into wind and marine technologies, and he believes the Green Investment Bank will also soon be helping by unlocking additional private investment – all of which could add up to 76,000 new jobs in the sector by 2021.

Nevertheless, he warns that more needs to be done to encourage investors to put their money into Britain, rather than any of the other places competing for the same funds.

“Now is the time to ensure the UK does not miss out on this unique opportunity,” he says. “It is important that the UK sets a 2030 decarbonisation target so that investors receive confidence that the investments they make today will be supported in the future.”

Tax incentives are another way that green power investment can be encouraged. In the US, for example, there are incentives such as the renewable energy investment tax credit (ITC), the specific benefits of which depend on the type of project, and a production tax credit (PTC) of 2.2 cents per kilowatt-hour generated for certain utility-scale installations, including the likes of wind turbines.

“While renewable energy projects call for long-term investment, the PTC is typically only extended for a year or two at a time.”

“This approach has been very successful and has helped the US wind industry expand dramatically over the past decade,” a spokesperson for the American Wind Energy Association (AWEA) explains. “The PTC is one of a very few mechanisms with bipartisan support in Congress – tax credits are a very familiar approach to providing support for emerging or existing industries.”

According to the AWEA, the PTC and the Renewable Energy Standard (RES) – a requirement placed on utilities to obtain a state-set minimum percentage of their electricity from renewable energy sources – have proven popular with investors. “Other, more complex approaches to encouraging private investment in renewable energy, such as a carbon tax, cap-and-trade and feed-in tariffs (FIT), have yet to attract the same level of support.”

However, while renewable energy projects call for long-term investment, the PTC is typically only extended for a year or two at a time.

As the AWEA put it: “Policy stability would help attract more capital from investors who have shied away from the constant threat of expiring federal support.” Hubbard’s point about certainty is clearly a universal one.

“Carbon trading could really come into its own as an investment vehicle in future.”

Power auctions are one approach that could help, and they are something which India has been successfully using for some time – along with tariff-incentives and power-bundling arrangements – to boost investment in the sector. With a commitment to reduce dependence on coal-fired generation – which currently accounts for around half of Indian energy – and in the aftermath of July’s world record power outage, New Delhi now plans to accelerate the auction programme to add 3,000MW of solar capacity by 2017.

The idea could hardly be more simple; the lowest bidder wins the right to supply energy, and this premise has already seen a surge in India’s capacity and the cost of solar power fall by more than a third during the last two financial years.

By contrast, the world’s carbon trading schemes are rather more complex, and, although they can undoubtedly be effective, to quote from the UK Financial Services Authority (FSA): “Investing in carbon credits comes with great risk and is generally only suitable for the most experienced and savvy investors.”

The FSA warns that while there are many reputable firms across the globe operating in this sector, the clear and very powerful appeal that the whole carbon-offset idea has to investors has also attracted con-men and scam-artists.

Despite these problems, however, carbon trading could really come into its own as an investment vehicle in future, particularly in the light of the announcement at the end of August of the world’s first inter-continental link of emission trading systems between the EU and Australia. If all goes according to plan, by 2018 carbon units will be reciprocally recognised, simplifying compliance under either system for businesses – and potentially making the case stronger for similar link-ups elsewhere.

It seems there may also be an element of self-sustaining investment to come from within the sector itself, as established technologies in turn begin to feed funding into less currently cost-competitive forms of low-carbon generation.

Joss Blamire, Scottish Renewables’ policy manager, reports that the renewables industry has managed to invest some £3bn into the Scottish economy despite the downturn, most of it in onshore wind.

Blamire predicts this could be significant in the coming years. “It is mature sectors, such as the wind industry, that will help fund emerging sources of renewable electricity and under-write investment in grid connections that will benefit sectors such as wave and tidal,” he says.

However, perhaps some of the most radical thinking on the issue comes from the Climate Bonds Initiative, and an idea that Sean Kidney, the not-for-profit organisation’s Chair, outlined at the 2012 Bloomberg New Energy Finance Summit in New York; using the bond markets to plug the funding gap.

The mainstay of asset-based funding for centuries in Europe, covered bonds are considered a safe investment, because they provide a double layer of security – a ‘cover pool’ of assets providing extra protection for investors over and above their usual direct recourse to the bond issuer itself.

Amounting to some €2.5 trillion (£1.6 trillion), the covered bond market represents a significant potential source of private sector institutional investment for low-carbon power – and one which Kidney says has, to date, been largely untapped.

With massive private sector investment widely seen as essential to the future of renewable energy, and traditional asset and mortgage-backed securities now appearing less attractive to many investors than they previously were, it may not remain so for much longer.

The Blyth offshore wind turbine blade test facility is located in Northumberland, in the UK.

Energy efficiency: could smart power save the euro?

How effective is Europe’s new Energy Efficiency Directive in the context of the European sovereign-debt crisis?

Australia and China have formed a new partnership to clean up their abundant coal supplies.