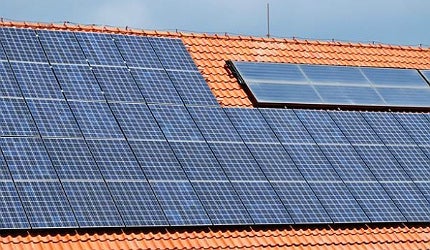 Turning air and sunshine into affordable renewable fuel sounds like an improbable and costly idea. Not according to researchers at ANTECY, who say it’s not such a wild idea after all.

After more than two years of research conducted both at the University of Twente, Netherlands, and the University of Valencia in Spain, the company believe they can now make methanol and clean water simply from solar panels and air, while saving wasted solar energy.

“The question many will want to ask is: if this is commercially viable why hasn’t it been done before?”

Plus, they want to cut out intermediate processes companies usually have to go through in order to make biomass into fuel, by going direct to the source.

The question many will want to ask is: if this is commercially viable why hasn’t it been done before? And the answer would be because of cost. ANTECY face many challenges in making their model cost effective on a commercial scale. At present, according to their own calculations, their method of making methanol is three times more expensive than current market methanol.

Also, solar panels are expensive to buy and fit. ANTECY’s team believes the latter problem will be solved by itself with a natural fall in market price of solar panels. The first is the more problematic hurdle they are seeking funding for – which is itself another handicap – in order to overcome it.

The science behind the idea

“This process would happen with solar panels fixed to the roof of houses and buildings, where solar energy and air are both produced.”

“The general idea is to use solar power to convert the CO2 out of air and with water convert air into fuel,” explains ANTECY managing director Saša Marinic.

But how exactly they do this? Founder of ANTECY, Paul O’Conner, explains the science behind this independent company’s ambitious goal: “The first step is you start with air. Many people start with CO2 and reach gas; on one hand it is easier because the CO2 is already concentrated…but the problem is it is usually very contaminated. You need to clean it, which is very expensive.”

“We don’t do that, we start with normal air which means we have to suck it up the system – that is the most energy intensive step. Then we have a filter, which for one household would not be bigger than a small box, from which the CO2 is pulled out of the air and stored and attached to a low cost absorbent.

“Once it is full, we release the CO2. Then the CO2 is combined with hydrogen which you produce from water and solar energy. Solar electricity is used to electrolyze water to make hydrogen; you don’t store the hydrogen because it is dangerous. You react it straight away with CO2 forming the methanol. Methanol is the first step, it can then go into different things, such as gasoline, and you can put it in cars.”

This process would happen with solar panels fixed to the roof of houses and buildings, where solar energy and air are both produced.

As O’Conner points out, components of this process are not new. Extracting CO2 for example has been done before, as has the conversion of CO2 into liquid fuel, but they are both costly. ANTECY’s biggest problems was, and still is, turning it into a relatively affordable and more efficient process and creating the technology to do this.

“Fuel is a commodity and to survive in a competitive market place any new energy model must be not only innovative but affordable.”

ANTECY now believe they are ready for prototype testing. However, there are further hurdles to master. These are: making their product cost effective on a large scale – the main obstruction to this being the price of solar panels – and funding their project without moving into venture capitalism.

However, O’Connor isn’t worried about competitiveness and market prices. He says: “The price [of solar panels] is coming down drastically. Many companies are going broke because it’s coming down so fast they can’t keep up with it. By the end of this decade electricity from solar energy will be cheaper than coal or gas.”

Fuel is a commodity and to survive in a competitive market place any new energy model needs to be not only innovative but affordable, which ANTECY’s methanol is not yet.

O’Connor adds: “Internally we are looking to make converting the CO2 into methanol more efficient. That is where we are focusing on in the next year. The way I see it in 2020 the fuel that is coming out of the ANTECY programme will be really competitive.”

Remaining funded without losing the integrity of the product is what O’Conner sees as the bigger problem.

“Our biggest limitation is always the finance, we are a small company. We want to avoid working together with venture capitalists…we want to keep as much in our hands now as possible until we can either license or work together with a big company.

“Once you go with venture capitalists the whole priority changes. Of course we need to make money, but our goal is not to maximize the profits but spread the technology as wide as possible, it’s a little bit more idealistic. That’s why we’re trying to get crowd funding,” explains O’Connor.

By crowd funding he means Symbid, where individuals can invest in technology of the future online. Currently ANTECY is aiming for 100,000 euros but only has 14,820 euros so far, although they do have several ‘angel’ investors supporting their work.

Putting energy and water to good use

“As well as making methanol, the process can make pure water which ANTECY sees being used in an agricultural setting.”

ANTECY’s aim is not solely to create methanol or gasoline, but to also put unused energy to good use. ANTECY researcher, Timo Roestenberg, explains further: “Imagine, if everyone covers their roofs with solar panels. All of the solar energy is produced during the day, when you’re not at home. This is then given back to the energy grid. But if we all start doing this at the same time, the energy grid will be overloaded. We want to use this excess of electricity to produce liquid fuel.”

As well as making methanol, the process can make pure water which ANTECY sees being used in an agricultural setting.

“[Through the process] you produce just about as much water as methanol and that makes it very attractive for third world countries where the shortages of water is a very pressing matter,” says Marinic.

If this ambitious company removes its limitations, where does ANTECY see their technology being used in the future?

“We are thinking about community focused projects where there would be many houses together making methanol and water that they can use together. We would export technology, not export the fuel,” Marinic suggests.

Optimism for the future

ANTECY is hoping to roll out their community based renewable energy schemes in the EU, US, Australia and North Africa and ‘wherever the sun shines.’

“Only time, funding and research will tell if ANTECY’s global renewable energy dream can be realised on a commercial platform.”

Approximately 70 square metres of roof is enough to make one household self sufficient, continuously, but it varies from country to country and depends on how much sunshine each receives. For smaller projects they hope to partner with a supplier and for bigger ones to sell the license to or work with a big company.

Whatever the future holds, there is no curbing ANTECY’s enthusiasm as Paul O’Conner shows excellently.

“Even if it isn’t that cost efficient there are applications where it could be very helpful. If the big companies could store the [wasted solar] energy in a fuel – even if it is not the most efficient way – it is already a step forward.”

Finally he adds: “We want to get the prototype to show people ‘hey, it can be done.’ Sometimes only when people really see it happening they realise ‘oh, this can done’.

“In the meantime after prototype one, two, three, we will keep improving the process until it is more cost effective.”

Only time, funding and research will tell if ANTECY’s global renewable energy dream can be realised on a commercial platform, but one thing is for sure, you can’t doubt them for trying.

Wind power has been dealt a huge blow in recent years due to insufficient grid connections.

Sub-Saharan Africa is experiencing a powerful transformation as small-scale installations catch on.