NTPC India’s Gandhar Power plant is located at Urja Nagar, in Bharuch district of Gujarat, India.
The 1,300MW Gandhar Stage-II expansion project within the premises of existing plant has been subject to indefinite delays due to lack of gas supply.
Gandhar power plant generated 3,684 million units (MU) of power during 2011-2012. 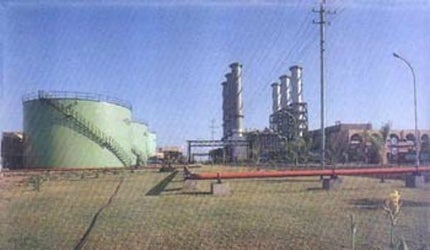 The Gandhar power plant has been operational since 1994. Shortage of adequate natural gas supply has led to under-use of the plant’s installed capacity.

The plant has maintained machine availability of 90% consistently but is currently operating at below 70% plant load factor. During 2011-2012, the facility generated 3,684 million units (MU) of power.

In July 2012, NTPC awarded a contract worth €53m ($69m) to Alstom to renovate the gas turbines of the Gandhar plant that have been in operation for more than 15 years. The renovation project is scheduled for completion in three years. The turbines were originally supplied by ABB, whose turbine business was acquired by Alstom in 2000.

The Gandhar CCGT Stage-II was initiated as an expansion project in 2002 to add 1,300MW of capacity to the existing plant. The $118m expansion was approved by the Indian cabinet in 2006. However, the project could not be implemented because of a dispute over gas supply with Reliance India Limited (RIL).

“The project has been delayed indefinitely following the Power Ministry of India’s advice to not plan any gas-based projects until 2015-2016 as a gas shortage.”

Despite this ongoing legal battle with RIL, NTPC approved a revised feasibility report and sought fresh clearance for expansion of its Gandhar power project in 2010.

NTPC also floated a tender worth Rs2.6bn ($47.61m) in April 2011 to source equipments for the expansion project.

However, the project has been delayed indefinitely following the Power Ministry of India’s advice to not plan any gas-based projects until 2015-2016 as a gas shortage looms for the power sector in the country.

Details of the gas supply dispute for Gandhar expansion

Out of the seven bidders, RIL offered to supply 12 million standard cubic metres a day (mcmd) of gas at the lowest price ($2.34 per million metric UK thermal units).

A letter of intent (LOI) was sent to RIL for supplying gas at the agreed price for a period of 17 years. The LOI was confirmed by RIL in June 2004, but the gas supply tender was not implemented as RIL sought major changes in the gas sale and purchase agreement (GSPA), which was not agreed by NTPC.

NTPC filed for legal action against RIL in December 2005 for its noncompliance with the terms agreed during the bidding process. As of January 2013, the case was still pending in the Mumbai High Court.

Stage I of Gandhar plant, with an installed capacity of 648MW, was built by a consortium led by Marubeni Corporation of Japan. ABB Germany supplied the turbines and was responsible for the basic engineering works of the plant. Kawasaki Heavy Industries supplied the heat recovery steam generators and the cooling water system.

The first three generating units of the plant were commissioned in 1994, with the last unit following in March 1995.

Construction of the plant involved an estimated investment of $454m. It was partly funded through $328.6m of borrowings from the Overseas Economic Cooperation Fund (OECF) Japan. The loans were obtained through Government of India.

Gandhar plant and associated facilities spread over an area of 483 acres. It consists of three gas turbine generators with 131MW of capacity each, one 255MW steam turbine generator, and three heat recovery steam gas boilers.

The gas turbines (Frame GT13E1) supplied by ABB (now Alstom) are based on silo combustor configuration with dual burners. The turbine also has a compressor with rows of variable guide vanes and low nitrogen oxide (NOx) emission mechanism.

Other associated infrastructure of the plant includes cooling towers, a water pre-treatment plant and a demineralising plant.

The Gandhar CCGT plant runs on natural gas and uses water from Narmada River. It needs 3.12mscmd of gas supply for operating at 90% plant load factor.

NTPC’s Kawas power plant was being supplied gas through the HBJ pipeline. The Kawas plant was converted to dual fuel (LNG and Naphtha) firing facility so that the surplus gas can be diverted to the Gandhar facility.

Power distribution from the Gandhar plant