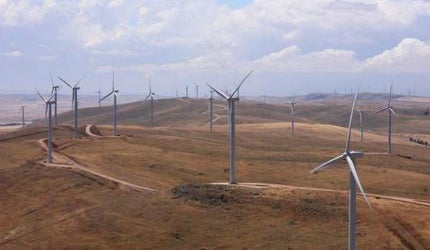 The Snowtown Wind Farm (SWF) is a 370MW onshore wind energy facility located on the Barunga and Hummocks ranges, about 140km away from Adelaide, Australia. In January 2004, Wakefield Regional Council approved the planning for the construction and operation of the SWF.

The project is owned by TrustPower, based in New Zealand. SWF-I was jointly developed by Wind Prospect and TrustPower.

Construction of SWF-II was split into two separate wind farms, 144MW Snowtown 2 North with 48 turbines and 126MW Snowtown 2 South with 42 turbines. The two phases together have a total capacity of 270MW.

The initial phase of construction focussed on roads, hardstands and foundations, as well as the installation of electrical and communication networks. The first power was generated in October 2013.

SWF-II is equipped with 90 gearless SWT-3.0 wind turbines rated at 3MW each. It has 23 turbines, each with a rotor diameter of 101m, and 67 turbines with 108m rotor diameters. Each turbine has a hub height of 80m and a blade tip height of 134m.

"The two phases together have a total capacity of 270MW."

Siemens was awarded with a contract to engineer, procure, construct (EPC) and maintain the SWF-II. Under the deal, Siemens supplied and installed gearless drive turbines on the project site. It also engineered and supplied substations, switchgear and transformers.

ElectraNet provided the transmission connection. The construction of the wind farm was carried out by Siemens, CATCON and Consolidated Power Projects (CPP). CATCON was responsible for the civil works at the site, under a subcontract with Siemens.

Downer EDI was responsible for the installation of the 28km overhead transmission line.

South Australia is the country’s leader in renewable energy. The state is currently trying to achieve 33% of electricity generation from renewable sources by 2020.

SWF phases I and II are able to fulfil more than 10% of South Australia’s annual electricity demand.

Hallett 5 is a 52.5MW onshore wind farm built over the Porcupine Range in South Australia.

Macarthur is a 420MW wind farm being constructed near Hamilton, 260km west of Melbourne in the state of Victoria.