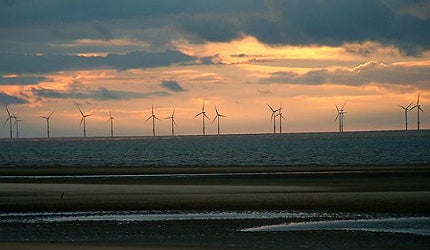 For a long time certain renewable energy technologies have failed to enter the market to due to their high pricing, lack of proven track record and inability to provide a consistent level of power.

"The world’s ageing electrical infrastructure has stopped renewable energy companies from developing technologies as quickly as they would like to."

But the smart grid could be what the industry needs to break down these barriers and provide a more stable platform for growth.

As a concept, the smart grid is nothing new. The term has been in use since 2005, when it appeared in the article, "Toward A Smart Grid", by S. Massoud Amin and Bruce F. Wollenberg.

Since then, a suite of technologies put in place to transform electricity delivery systems have rapidly matured.

Brian Warshay, Lux Research associate, explains: "Smart metres are becoming, especially in developed countries, the status quo because they make sense – they save utilities money on just the metre reading, to say nothing more of the additional benefits."

The latest smart grid opportunities include monitoring and managing of penetration on the grid using sensors and storage devices, to improve operational efficiency and promote a more even deployment of renewable energy sources.

Governments around the world have put in place targets to ramp up renewable energy production, but in order to meet these goals, there needs to be smarter infrastructure in place.

"The latest smart grid opportunities include monitoring and managing of penetration on the grid using sensors and storage devices."

Grid operators are required to guarantee 100% reliability to prevent blackouts, but with wind and solar electricity set to jump from 1.5% to 11% of total electricity generation before 2050, they are faced with the challenge of dealing with inherently unreliable energy resources.

In a recent study entitled ‘Cloudy with a Chance of Energy: Evaluating Technologies to Manage Grid Intermittency’, Lux Research explains that power output from wind and solar resources fluctuates in frequency, magnitude, duration and speed.

"Increasing renewables penetration from 10% to 30% of generation capacity without increasing grid flexibility increases the amount of storage needed to mitigate renewables curtailment by a factor of 32," the report says.

At 30% wind and solar, two percent of the highest peak generation can be shifted most cheaply using demand response programmes, which enable the management of customer consumption in response to supply conditions.

"Companies can go to industrial and commercial facilities and install management and monitoring devices on major loads, like an air conditioning unit or a big kiln. Using those monitors, when there is a high demand of electricity, the grid utility can send a signal to the third party aggregator and tone down the demand at the load side, by dimming the lights or turning off the AC for thirty minutes," explains Warshay.

"You could connect as much wind and solar on to the grid as you like, but you would be wasting a tremendous amount of energy if you didn’t have demand response or a more flexible grid to account for it."

Using demand response, customers can also control their energy use as they sit fit, explains Environmental Defense Fund clean energy analyst Colin Meehan: "If they want to primarily use wind and solar power from the grid, they can receive signals from the grid which say ‘right now there is solar on the grid, go ahead and run your dryer’."

Energy storage technologies are known to offer superior flexibility and speed to respond to utility signals, but they are also ten to 30 times more expensive than demand response programmes.

"The smart grid could be what the industry needs to break down these barriers and provide a more stable platform for growth."

The future of smart grid is highly dependent on government policy and subsidy. Mandates from the EU requiring utilities to deploy smart metres, and subsidies introduced by the US are encouraging the deployment of smart grid technology.

Further deployment of smart grid technologies, including distribution automation, demand response and energy storage are expected to follow the introduction of policies and opportunities to improve grid reliability.

"As technologies mature, intermittent renewable energy penetrations increase, and market structures better value some of these new technologies, data management and understanding will be key to enabling future generations of smart grid technologies."

Certain government regulations may also be holding back the mass roll out of smart grids. In light of this, the EDF is working to update some US regulations to reflect an evolving electrical market.

Meehan explains: "In a lot of regulatory frameworks throughout the US and in some parts of Europe, there are regulatory barriers to companies who, for instance, want to lease a homeowner’s rooftop and sell the electricity back to the grid.

"These kinds of barriers exist for reasons that are now out-dated in many ways. It’s always difficult to overcome those barriers because electrical companies are comfortable with the way the regulations are right now and are concerned about how they are going to affect their business model."

The world’s ageing electrical infrastructure has stopped renewable energy companies from developing technologies as quickly or as robustly as they would like to.

With the introduction of a smart grid programme, however, the barriers to entry become much lower as customers begin to control their own electricity consumption.

Meehan says: "We will start to see how much we can save if we install a solar panel and because we have sophisticated metering, the utility will pay us back for the electricity we put on the grid."

Making renewable liquid fuel simply from the air and sun sounds too good to be true, but there is one bold power technology company who believe it’s more than just a viable energy solution.

Smart grid adoption in the Middle East – an oasis of opportunity

The Middle East is in the early stages of smart grid development but accelerated growth, fuelled by large domestic demand, means the door of opportunity for investors and technology manufacturers is open.

Data collected from smart meters could, in theory, be used to track people’s movements within their own homes.