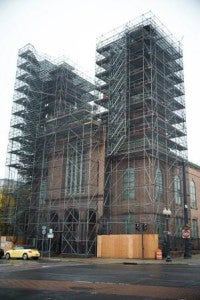 Certain buildings just catch the eye of a scaffolder. Interesting angles, odd leanings, and jutting spires fire their creativity and problem-solving abilities, igniting a desire to build up and surround with caged frame. Bring these architectural features together in an iconic landmark, and you’ve got a real dream project. The draw is twofold: to engage a unique engineering challenge head on while contributing to a piece of history. Only rarely do such projects come around, but we are sure glad when they do.

First Church in Albany, New York, US, is one such project. This quintessential scaffolding project makes a two-year renovation of the parish house and church roof possible for the first time since 1939-1940. The final vision: to replace and repair the towers, restoring them to their original appearance as built in 1796, only with energy-efficient LED lighting.

And scaffolding makes it all possible.

The contrast between old and new is one worth noting. Structurally, First Church is a timber frame and brick building, with twin 115ft spires capped with acorn-shaped finials. Historically, First Church is also a place of interest. The building is listed on the National Registry of Historic Places and is the parish where Theodore Roosevelt attended services while occupying the governorship of New York. Centuries ago, wood scaffolding surrounded the church during its initial construction. These days, the church is covered in steel and aluminium scaffolding that rises more than 100ft.

It started in the summer of 2014, when Turner Construction Company of Albany embarked on the project that is now estimated for November 2015 completion. Upon award of the scaffolding portion, Tri-City Scaffold Inc. worked closely with Turner Construction, John G. Waite Assoc. PLLC-Architects, and scaffolding manufacturer Layher to design and install staging to access roof areas and make a complete refurbishment of the spires possible.

Using Layher Allround® Scaffolding, Tri-City incorporated overhead protection of sidewalks and doorways with working scaffold to provide access for multiple roof elevations, chimneys, and two spires. The system scaffold overcame various ground elevation changes with the ease of built-in versatility. However, north and south towers presented a special challenge. When TriCity began scaffolding for the south tower, they discovered that the more than 200-year-old brick tower leaned approximately 4in south and 2in east. Fortunately, the scaffold legs barely touched the eave line, and progress was not inhibited.

With both spires requiring major restoration, Tri-City installed a total of 11 working levels in addition to a stair tower to the south spire to access the levels easily. To achieve access to the north tower, a connecting bridge was installed between the towers above the main sanctuary roof. Aluminium stairs were installed on the north tower from the connecting bridge to each working level. This arrangement allowed 100% access to the towers and eliminated the need to move working levels as the project progressed, helping to achieve a more safe work environment.

Because each lift of scaffold included hundreds of components, a Geda Hoist was installed on each tower for the installation of the scaffold and for material transport during restoration work. Debris netting was also installed on the towers and along all working levels of the various roof elevations.

The shoring requirement for the church roof presented an additional challenge. A shoring plan was implemented within the attic and above a suspended plaster ceiling using existing brick shelves and a primary timber truss. Beams were built in place spanning from the brick shelves to the truss. A combination of 2in x 6in and 4in x 4in lumber on these beams then supported the rafters, some of them hand hewn.

All these considerations mean that future scaffolders may get a chance to try their hand at another restoration of the church 200 years from now. In all likelihood, they’ll marvel at the effort we regard as simply part of the task today and tip their hat at those that accepted the challenge before taking it on yet again.

Layher has been committed to meeting the profitability, safety, and efficiency requirements of companies across...

The main use of the Layher Allround scaffolding system is for demanding scaffolding applications -...

Layher would like to thank all attendees at this year's Conexpo, which ran from 7-11...

The Next Generation of Layher Products